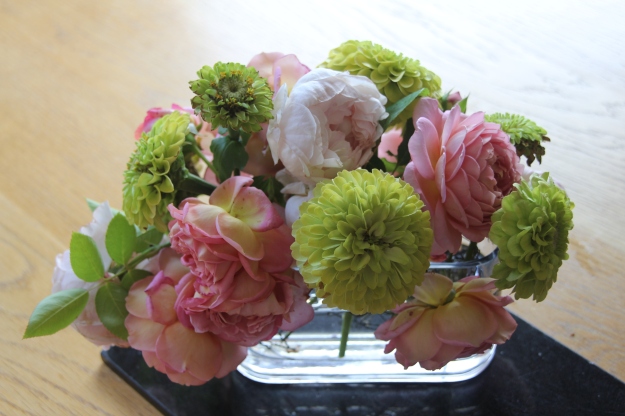 A very ‘sherberty’ arrangement for the Bank Holiday (and the visit of the Mother in Law).

Like Cathy this week, I used chicken wire as the blooms were so heavy I couldn’t get them to ‘wedge’ in such an open vase, but also like Cathy, I noted that it was none too forgiving when you wanted to rearrange!  However, I’ll definitely forgive it, as I don’t want to use oasis, and even if I did, I couldn’t in a glass vase!

The blooms were arranged on Friday and already by the time I took this picture the ‘St Swithun’ rose (in the centre) was looking a little droopy, and a couple of the Zinnias a little crusty.

Zinnias generally last really well in a vase, and the majority of these ‘Benary Giant Limes’  will be looking good for days, together with the gorgeous rose, ‘Jubilee Celebration’.  I think perhaps the crusty one’s stem had simply missed the water – oops!

Wishing you all a fabulous Bank Holiday – with or without bon bons! 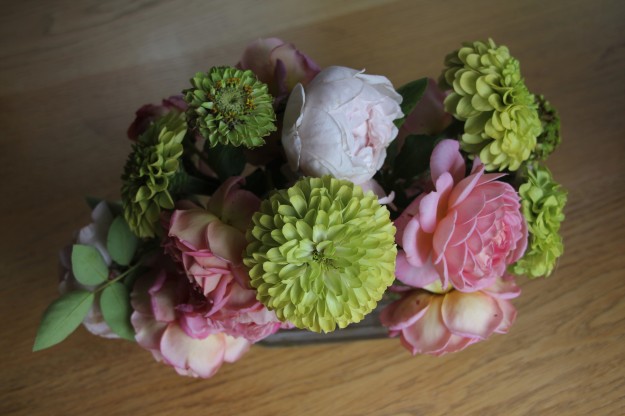 I’m embarrassed to say I’ve tried for at least two years to grow Zinnia Queen Red Lime and either germination has been really poor, or I’ve managed not to look after them as seedlings and they’ve damped off and died.

This year I’m really excited that they’re growing and flowering.  At the moment the stems are very short so I used the milk bottle circle to show them off.

I’m sure they’re not to everyone’s taste but I just love the rather sludgy pink of them and decided to go for a rather low key colour scheme to keep them company. 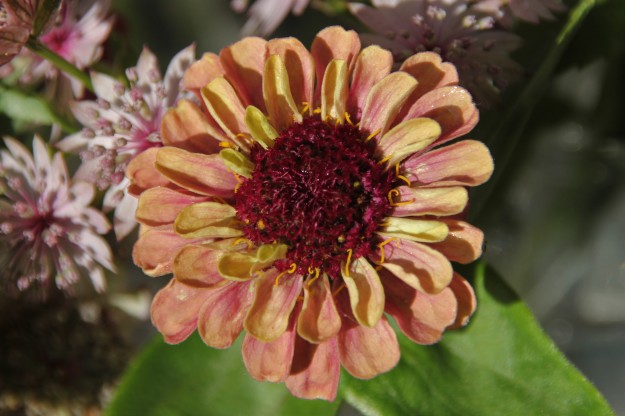 In addition to the two Zinnias (there’s also a green one, Z. Benary’s Giant Lime) I added a rather random mix of Astrantia, poppy seed heads, Erysimum ‘Red Jep’ (bottom left) and a little Sedum. 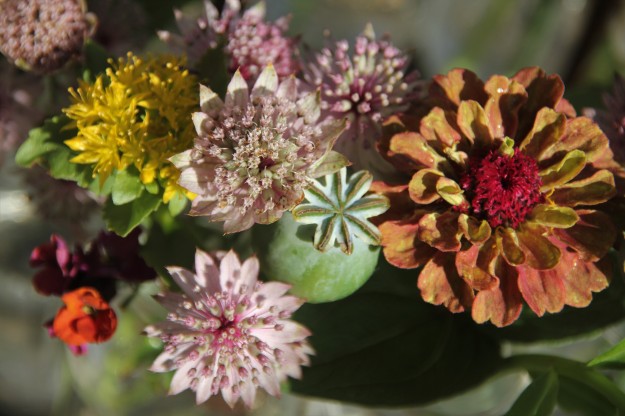 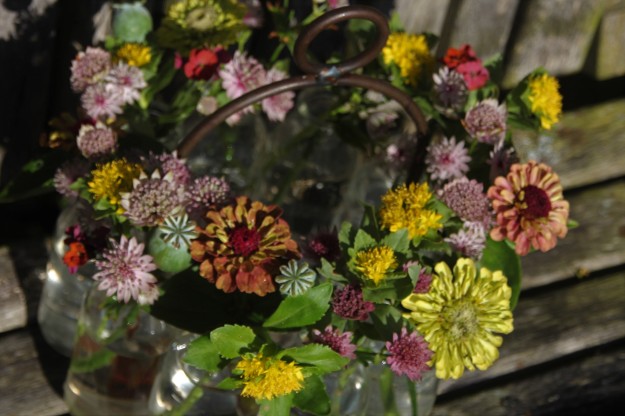 And to finish, last week’s ‘on a desk’ arrangement.  Yes, more ‘Queen Red Limes’ but altogether a much more sombre palette.  Turns out it was pretty appropriate for last week’s work mood, so this week I’ve picked a much jollier bunch to see if that helps! 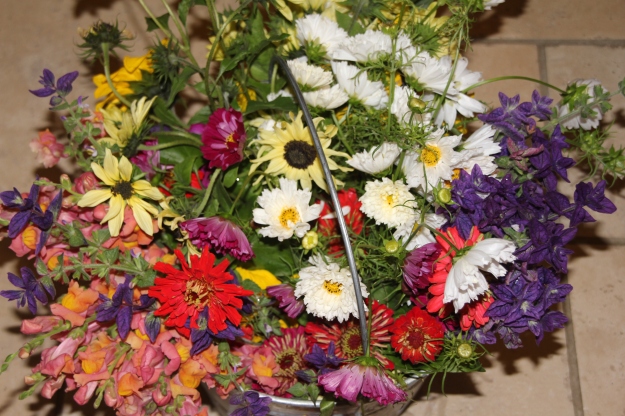 I’ve been remiss in not posting about my satellite Cutting Garden (in my neighbours’ walled garden) since it looked like this at the end of May.  And now it’s producing bucket loads of blooms, like the one above.

The following photos were actually taken last week, but when I visited today it’s clear the recent rain has battered everything quite badly.  I’m never great at staking (always thinking I’ll get away with it!) but this year, when it was clear some stakes were needed, it was so dry I couldn’t get them into the ground.  Quite what my excuse was for not getting round to it as the ground softened is anyone’s guess.  Tsk!

This photos is looking in a similar direction to the one above and shows the Cosmos Double Click Snow Puff, with Cosmos Double Click Cranberries nearer the fence.  Down the slope are the Antirrhinum majus Orange Wonder  with Salvia horminum ‘Oxford Blue’ to the right.  In between are the Zinnias,

and my favourite, Zinnia Raspberry Cordial.

Looking up the slope you can see the Zinnias are still quite small (although have grown significantly in the past week).  Between the Zinnias and Salvias are a line of Ten Week Stocks.  Although they do smell lovely, they really don’t work for cutting, so I won’t be growing them again.

The sunflowers have been amazing this year. 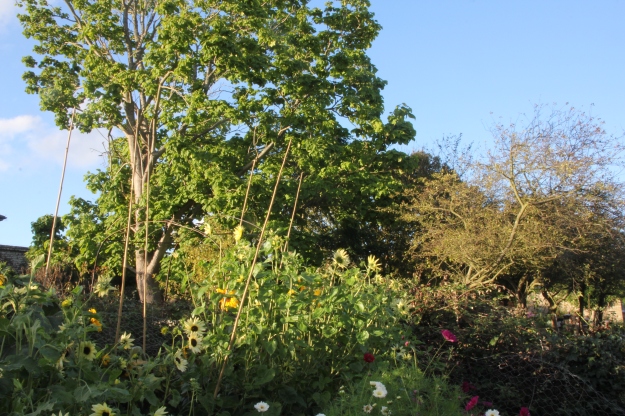 The large yellow ones, which were very kindly sent to me by Cathy at Rambling in the Garden, didn’t turn out to be the red flushed Ruby Eclipse we were both expecting, but now the huge central stems have been cut, there are plenty of smaller clear yellow blooms, which have that lovely sunflower cheer. 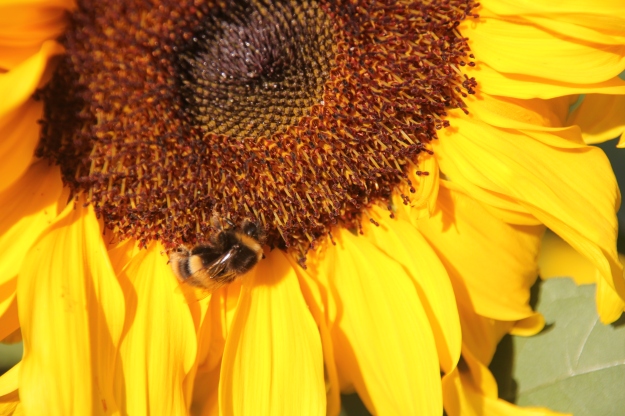 There are two other sunflowers, Helianthus cuc Italian White and Helianthus Vanilla Ice, but I can’t seem to tell the difference between them.  They’ve been absolutely great, hugely prolific and yet dainty and soft coloured for a sunflower.  I featured them in my ‘Moonflowers’ Monday vase and have used them every week since.

Back home, as well as more Zinnias, (including Z. Benary’s Giant Lime not at the satellite cutting garden) I’ve also been cutting Molucella laevis

and another favourite, Dianthus Green Trick.  This came originally from Sarah Raven, but I’ve already taken a number of successful cuttings and this weekend have taken a dozen more. They last for well over a week in the vase and retain this lovely fresh green. 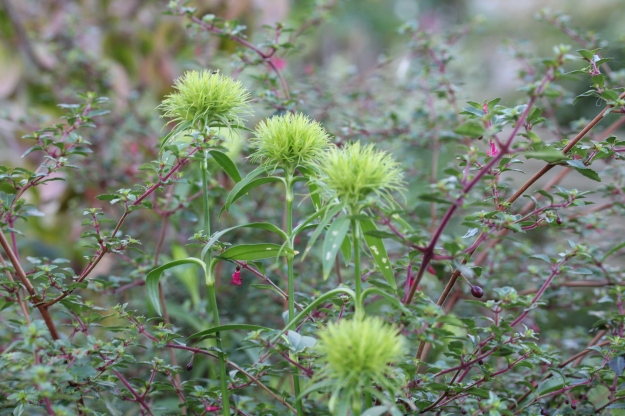 With many thanks to Julie at Peonies and Posies for hosting the Cutting Garden meme.

Now all I’ve got to do is decide what to choose for Monday’s vase!