So finally I can join Julie, at Peonies and Posies‘ party to talk about the cutting garden.

As last year, my cutting beds are spread about a bit which isn’t ideal, but I’m still very fortunate to have space for cutting blooms.  Again I’ve been allowed to use some space in my neighbours’ walled garden, however this time I have had two different areas allocated.  The first, shown above, is an area that used to be inhabited by chickens, but sadly they were dispatched by a fox earlier in the year and haven’t been replaced.  I’m glad to say there is another area with (live!) chickens just above, so I’m not without company. 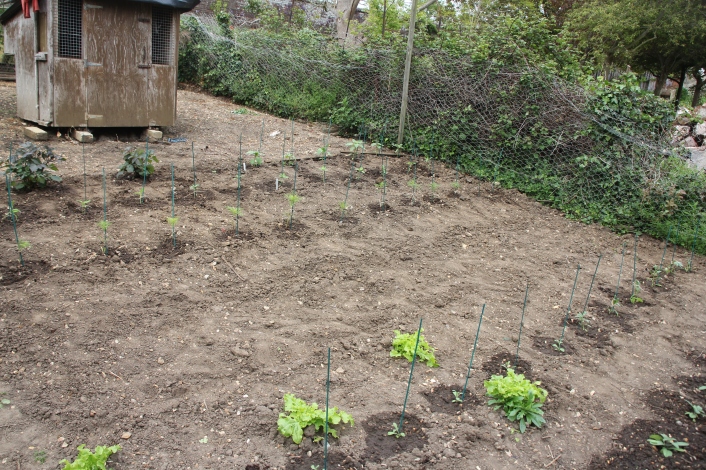 The bright green in the photo above is some (I assume) self sown lettuces that I didn’t feel I had the rights to dig up and discard!

As well as (let’s call it) the Chicken Bed there is also a smaller area next to one of the walls. 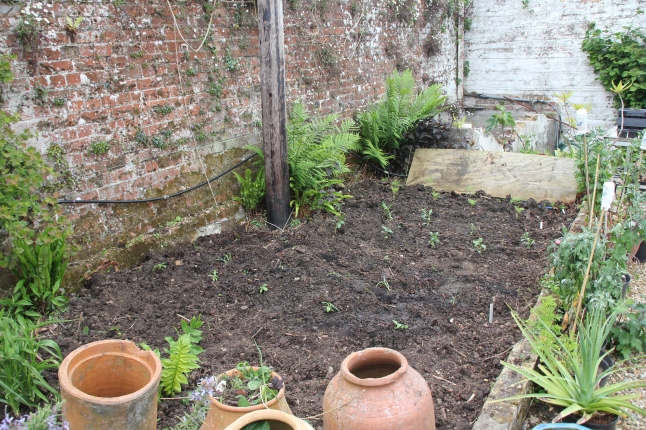 Whilst the Chicken Bed slopes to the south and is sunny, if rather stony and sandy, the Wall Bed is to the east of the wall and loses the sun relatively early on.  However the soil here seems richer; I think there’s been manure added (you’d think the chicken area would be rich with chicken poo, but it doesn’t seem so).

If you look closely, you can see I have now planted both areas out and I’m interested to see how they fare comparatively.  I haven’t planted any sunflowers in the wall bed as I didn’t think they’d be happy, but I have planted some seedlings in common across the two.

I’ve also got multiple different Zinnia seedlings ready to go in the Chicken Bed in a week or so, as well as plenty of sweet peas that I don’t have space for at home (largely because of my new wider spacing strategy).

As well as the two beds at J&A’s, I’ve also got the two raised beds I used for the first time last year.  The photo below shows them in August last year.

Both the Antirrhinums (front left) A. Liberty Crimson and the Euphorbia oblongata behind have overwintered and are looking good.   I’ve planted out some shorter seedlings here,  including Molucella laevis and Calendula.

Whilst I still seem to be up to my neck in seedlings, I’m already regretting some omissions of plants grown last including Amaranthus viridis and Rudbeckia Cherry Brandy.  I also don’t think I’ve got nearly enough foliage and fillers (I seem to recall Sarah Raven suggests you should have a similar quantity of flowers and foliage, well I’ve failed there!)

However, there are two bigger issues, firstly will I have any blooms to speak of for my daughter’s 18th on the 19th June?  And, conversely, later in the year once the cutting garden is in full production, what on earth am I going to do with all the blooms I will have?

Something I never confessed at the time, was that last year, when I wasn’t working, I sold flowers twice a week at the local post office (mostly small bouquets in tin cans, see below).  The trouble is, whilst I could still attempt to sell blooms, what I’m concerned about is that if I’m not there to pick them mid week will they all go to seed and stop flowering?

With many thanks to Julie at Peonies and Posies, (who has a completely glorious cutting garden) for hosting this meme.  Do go and take a peek.