A late foray into the garden and the combination of low light, macro lens and windy conditions have made for rather fuzzy photos, so apologies!

The view above shows the bed running by the kitchen wondow which contains the pink Rose Flower carpet,  However, as you can see, both the Leucojum aestivum and the Narcissus Tete a tete seem to have proliferated since last year, and the rose is hardly to be seen.  The Phormium to the right of the photo is the one I’d like to get rid of and replace with something for winter interest, but annoyingly, it looks quite good in this grouping.  Hmmm.

After my Lonely and Blue Wordless Wednesday post, I’ve now had many more Irises come into flower in the big copper pot.  What I can’t quite believe is that I planted such a mix.  I haven’t had time to look back at my order, but there appear to be three different blue/purples and a solitary yellow one.  Bizarre. 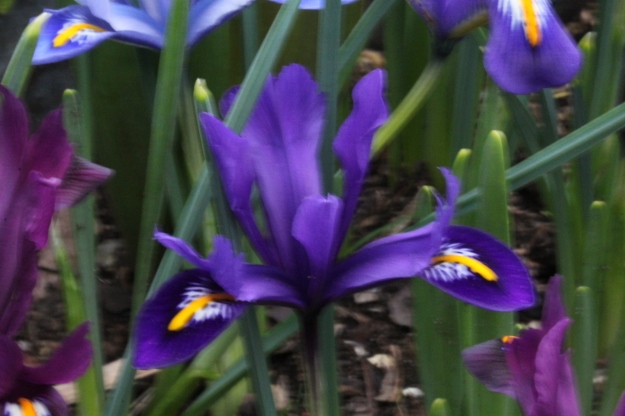 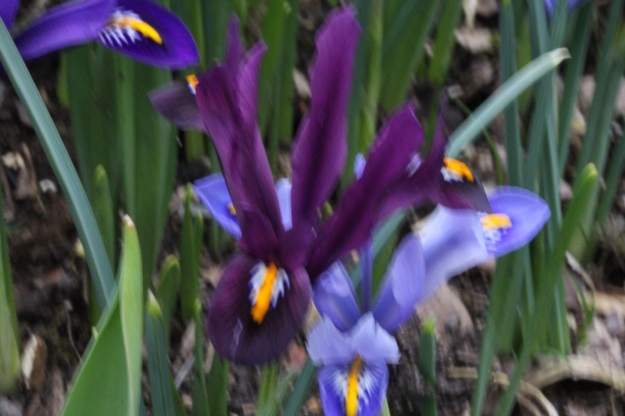 The hellebores are now at their best, unlike the photos

and here is a shot of the Hebe I arranged with some of them in Monday’s vase.

There are also a number of Euphorbias in zingy green bloom,

as well as a few Forget me nots just started to flower.  I like this slightly darker one. 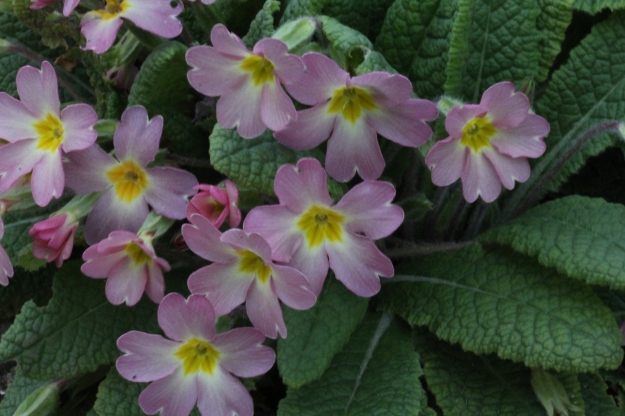 and has been joined by a new one I couldn’t resist, for sale at Osborne House,  (post to follow).

And to finish, a little grouping of bulbs by the door, Narcissus Tete a tete, Narcissus Elka and Muscari Armeniacum Big Smile.

The Narcissus Elka,  (close up below), is the one I’m growing for the wedding.  This is a ‘trial’ pot I left in the cold frame when all its peers got moved to the fridge two weeks ago.  I’m delighted with the colouring and the size and shape of the blooms.

So what of the others?  Well, contra to the majority of advice received, I’ve left them in the fridge!  They were allowed out for good behaviour last Monday, and I think I’ll do the same tomorrow, but they’re looking fine and have definitely been stopped in their tracks by the combination of cold and dark.

The Muscari for the wedding are Muscari Latifolium, not the one above.  You may recall these were looking a little behind and so spent the week before last in the greenhouse.  They put on rapid growth and so were moved out to the garden, but I’m thinking they might need to come back into the greenhouse as, not surprisingly, they’ve slowed right down again.

Thankfully, there aren’t too many pots, and so all this moving around and in and out is more entertaining than challenging.  My fingers are still firmly crossed, but I’m feeling a little more confident than previously.  Watch this space…

With thanks as ever to Carol at May Dreams Gardens who hosts the GBBD.

As in January, a strange mix of spring bulbs and rather more exotic plants are blooming.  The Grevillea above has a number of genus companions, including this one.

These are both outside, the first in the ground and the other in a pot that’s too heavy and too far from warmth to move.  Bearing in mind they’re (largely) Australian, do you think they’re following the seasons down under?

As well as the Iris reticulata ‘Gordon‘ featured last month, 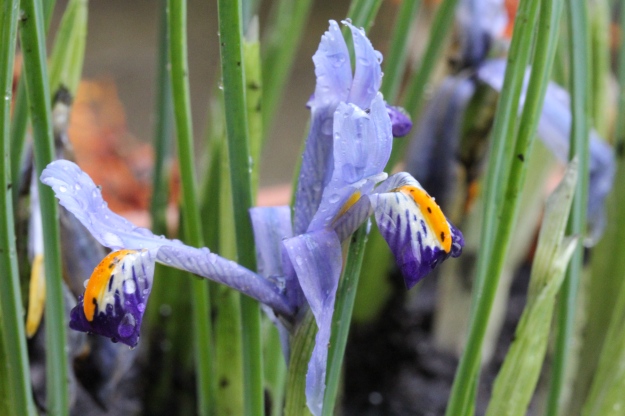 this has now been joined by Iris reticulata ‘Blue Note’, providing an early pool for the Lady Diver. Although why on earth she’d want to be swimming outside this early in the year I have no idea.

I’m very excited to report that since last month, my Hamamelis count has increased to three. The one below is the one I think is ‘Arnold’s Promise’. 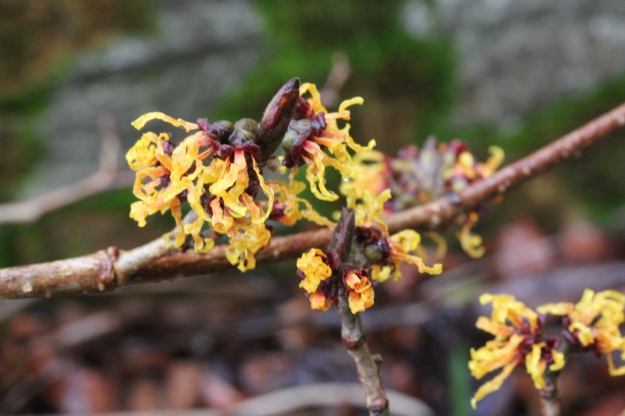 This has been joined by a very small  H. Jelena featured in last week’s Wordless Wednesday 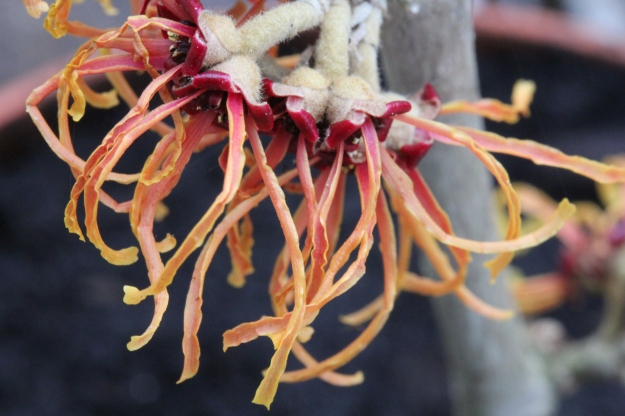 and, as of yesterday’s visit to the Hillier Gardens, a rather more magnificent H. Aphrodite.  I’m very chuffed that Aphrodite was my Valentine treat from the OH!

There are more Hellebores blooming, although they’re still not good at lifting their heads.  I seem to recall last year the first ones below, in particular, became more erect as the month went on. 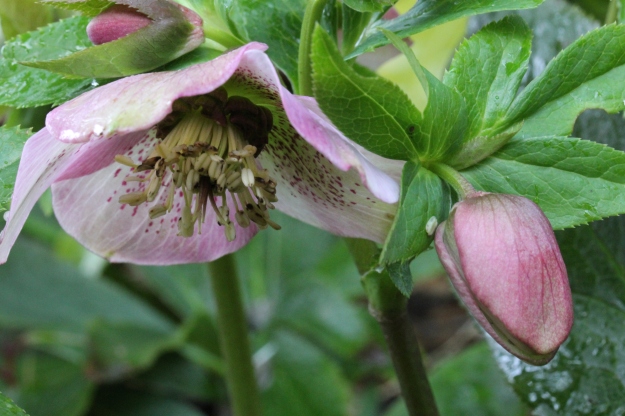 As far as bulbs are concerned, I actually have more of these (inherited) Leucojum than Snowdrops.

as well as many little Muscari Armeniacum ‘Big Smile‘, planted in pots.

My only real ‘winter interest’ shrub is the Sarcococca confusa.  Sadly this is tucked away in the shady bed, thus breaking all the rules about keeping it near the door so you can enjoy the perfume.

I have been considering digging out a large Phormium (which is near the door) and replacing it with something new for winter interest, but I just can’t decide what would be best.  I’m vacillating between Daphne/Lonicera/Viburnum.  Any thoughts? 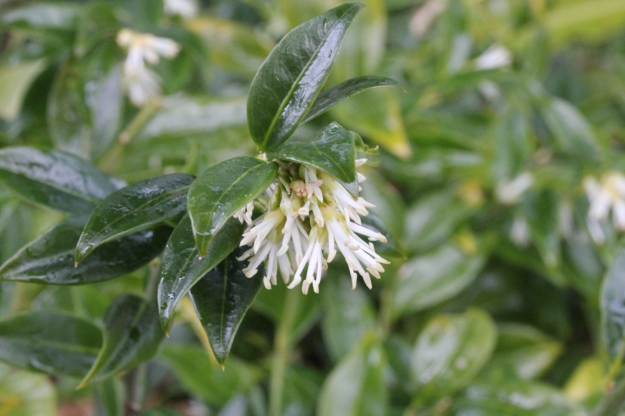 One of my favourite plants flowering at the moment is this little primrose.  It is self seeded on the steps which run between the two Lavender Beds.  It’s a lovely colour, rather more ‘dusky’ than this picture would suggest.  I would love more of it, but I’m terrified to try to dig it up to divide it in case I just rip the plant from the roots (it’s growing in a very small crack).  And I’ve never seen any likely looking seeds. 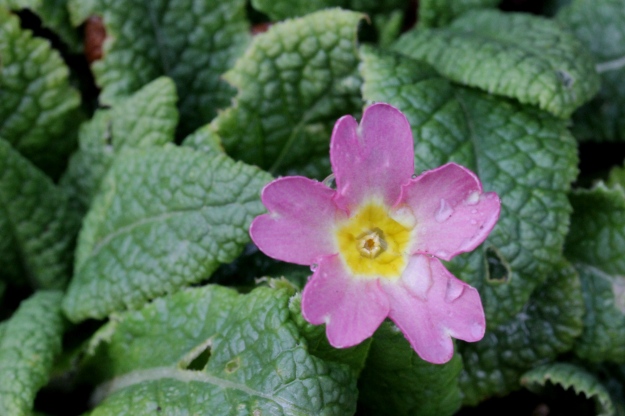 And, in case you’re missing the sun, (as I said last month), I give you the following.

Not quite as sunny as last month’s Abutilon ‘Orange Marion‘, but this one is the better named –Viola ‘Sunny Side Up’, 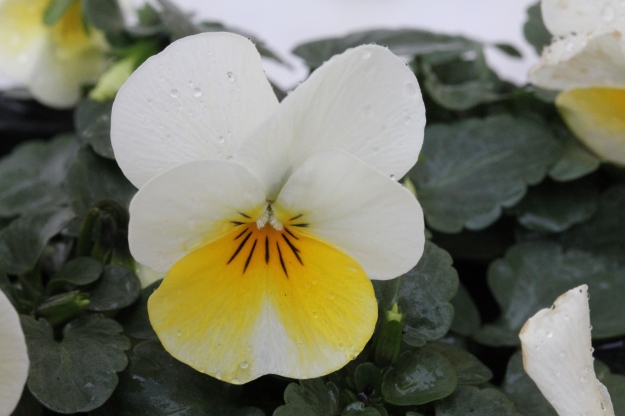 With thanks as ever to Carol at May Dreams Gardens who hosts the GBBD.

I’m joining Julie at Peonies and Posies for a second monthly Greenhouse post.

There’s not much blooming in the greenhouse at the moment, so I thought I’d start with this little Muscari – M. Armeniacum Big Smile.  I planted up lots of these bulbs in terracotta pots and have been bringing them into the house one by one.  Whilst the flowers above are only an inch or so tall, with the blooms still tucked well within the leaves, the pot currently sitting on the kitchen table has flowers stems nearly eight inches tall! 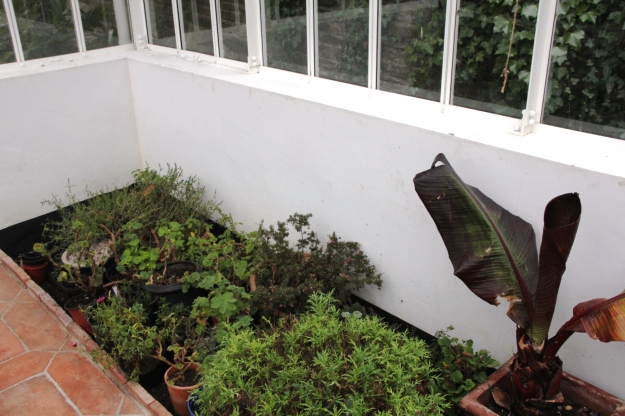 Since last month I’ve had a significant spring clean.  The tatty Sungold Tomatoes, which were still in the bed above, have all been cleared and the space has now been filled with various tender plants – pelargoniums, marguerites, a grevillea and a banana – which were previously at the other end of this bed.

Other than a big clean, I’ve sorted my seed trays and pots (no, I know I haven’t cleaned them…)

I’ve continued to watch over seedlings planted at the end of last year – Broad Beans, Calendula and Sweet Peas

and cuttings taken last year.  The ones below have been pretty successful – particularly the Diascia personata and Lavender at the back.  As you can see, the Marguerites at the front were a little more patchy, and the Pelargonium (front right) even worse, but there are still five plants for free – what’s not to like! 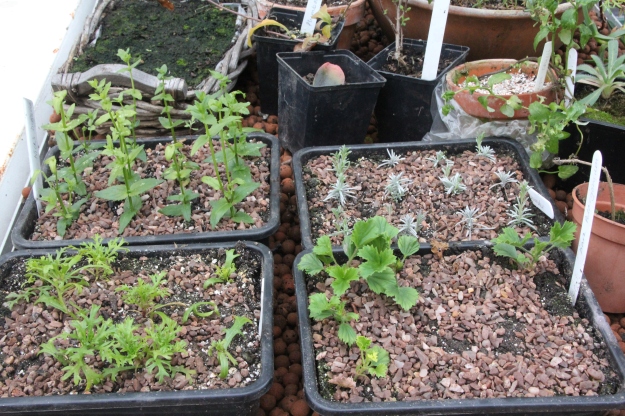 At the other end of the greenhouse I have my heated propagation mat.  I was worried last month that this had broken, but the problem seemed to be with the thermometer unit which I’d plugged in between the mat and the socket,  Once I’d removed this and plugged the mat in directly, all was toasty again.

The problem of course is I now don’t know exactly how toasty, but it seems to be doing the job as a batch of Sweet Peas planted on the 31st January are already showing brave little stems.

Since the 31st I’ve planted yet more Sweet Peas and Calendula (Buff Beauty for the Bronze Bed) as well as some poppies and also a Gentian, G. acaulis.  I would love to grow Gentians in the Diving Lady’s pool and I’ve read that this is the easiest Gentian to grow.  We’ll see.

There are plenty more seeds to plant this month, not only more hardy annuals, but also tomatoes and chillies.  Hopefully by next month there will be many more brave shoots to share.

With thanks again to Julie for hosting this Greenhouse meme.