What with my Northumberland jaunt, last weekend’s party and working in London every week, I’ve calculated that I’ve spent only ten whole days chez Duver Diary during June (and four of those working) and, whilst certain wonderful things carry on despite my neglect (roses, lavender, self seeded this and that) I do have a definite sense of the garden getting away from me.  If you look closely in the photo below, for example, you’ll see convolvulus growing up rosebay willow herb, surrounded by a fringe of couch grass.  So please don’t!

Taking a circuit round the garden from this point takes us first to the troughs.  These still have the very leggy Matthiola incana that I can’t bring myself to bin, but these have now been joined by seedlings of the (slightly shorter than ‘Purity’) white Cosmos, Cosmos ‘Sonata White’  and Salvia horminum ‘Oxford Blue.’  I’m hoping it’s going to fill out into a wall of blue and white, but it’s very early days and I do think this trough, being south facing and metal, does suffer if the weather’s warm (some chance!).  And no, I didn’t line the front panel with polysterene as you’re apparently supposed to.

On to the veg patch and the most obvious ‘crop’ below is the Sweet Peas, definitely not edible!  Otherwise, from front to back, I have (under fleece) Purple Sprouting Broccoli ‘Early Purple Sprouting’,  and Cavolo nero ‘Black Magic’, and then Chard ‘Pink Flamingo’, Mange tout ‘Shiraz’, Dwarf French bean ‘Safari’ and Runner Bean ‘Lady Di’.  And running along the front edge (right of photo) Courgettes ‘El Greco’ and ‘Gold Rush’.  I think these are all new varieties to me except ‘Lady Di’ and ‘Goldrush’ so it will be interesting to see how they all do – and how they all taste.

On the left, out of site, in the highest raised bed, I planted Squash ‘Sweet Dumpling’.  This bed isn’t easy, as whatever’s there has to compete with the bay trees which were there first and obviously suck out lots of water.  I thought planting upturned bottles together with each plant and watering directly to the roots should solve this problem.  I was a little worried that I only had one plastic bottle kicking about and so was going to have to go on a San Pelligrino binge, but no!  Slugs ate all but one plant, so turns out my single bottle will be sufficient…

Meanwhile, if anyone has any bright ideas as to what veg would be happy in a very dry, south facing raised bed, please let me know, because there’s plenty of space now!

In front of the main veg patch is a smaller bed holding strawberries and rhubarb.  I planted out some Agapanthus I’d grown from seed along the back wall last year as I thought they’d enjoy a good cook against the south facing wall.  And look – over a dozen flower heads.  So exciting! 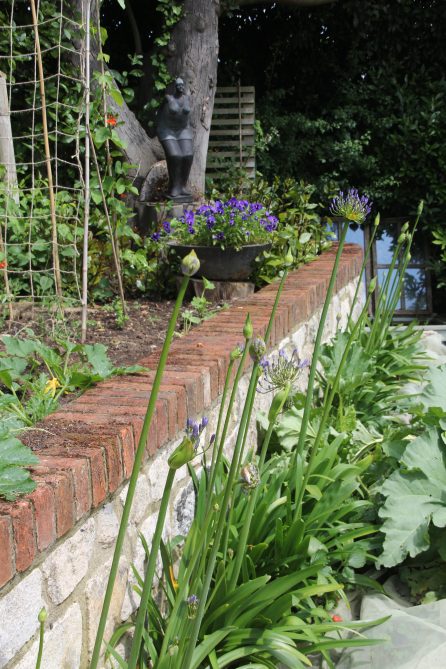 The Swing Beds definitely need a sort out.  Since their creation in 2011 it’s taken some time for them to fill up, but now, all of a sudden, I feel they’ve got rather unbalanced, with certain thugs taking over at the expenses of other things.  I definitely have too much of the pink geranium along the front, so I need to thin that out.  And then I also have a number of annuals I’ve grown from seed which need to be slotted in.

I live in hope that this weekend might provide time for a BIG SORT OUT, but we’ll see…

The grass bed has been completely dug over and emptied (apart from the Stipa) and has also been planted with annuals.  I’ve taken inspiration for the first year we were here, when I simply planted Cosmos in this bed.  This year I’ve included Cosmos bipinnatus ‘Fizzy White’ but have added Ammi visnaga ‘Green Mist’ to the mix.  I’m hoping for a white/green froth to echo the cow parsley in the field opposite.  We’ll see.

And in the interim, I’ve planted a few marigolds I had kicking around along the front edge.

I have been quite busy planting up pots post the big bulb throw out, but the one below is a new one, one of a matching pair given as a gift from my sister.  The concrete post is by the old (empty) chicken shed and the metal chicken normally sits on it but, as she’s not attached, she spends most of her time blown onto the ground.  I think she looks rather more settled amongst the pelargoniums and ipomaea!

In the Mid Century bed the Rosa ‘Falstaff’ is getting established on the obelisk, but you might remember I had good success with Rhodochiton atrosanguineus here last year, and I have now also planted some seedlings to see if they’ll cohabit with the rose.

On the other side of the garden the Oak Bed has now developed into a wall of shrubbery – the Cercis in particular has really filled out this year.

Closer to the house the Bronze Bed, new last year, is also exhibiting a rather floppy rose – Rosa ‘Pat Austin’.  I’m sure she wasn’t this tall last year and I pruned her pretty hard. 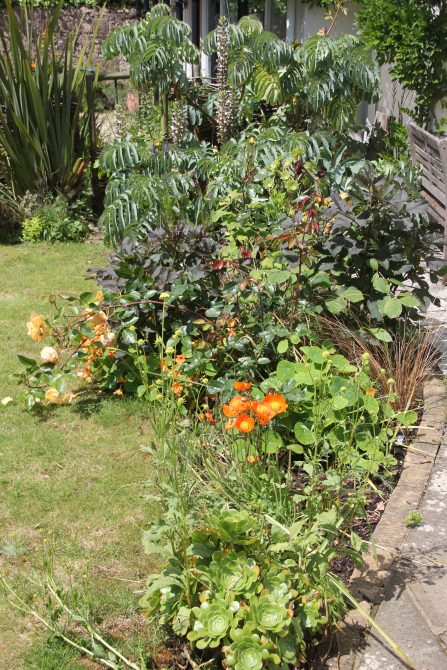 She may be a rather ungainly girl, but she’s certainly pretty.

In the greenhouse I’ve finally planted out my tomatoes, cucumbers and aubergines, but I couldn’t bear to pull out the Sweet Peas as they’re still flowering really well, so the toms have been relegated to each end of the bed.

….compared to all this lot outside!  Roll on the weekend….

With many thanks to Helen at the Patient Gardener for hosting our End of Month views. 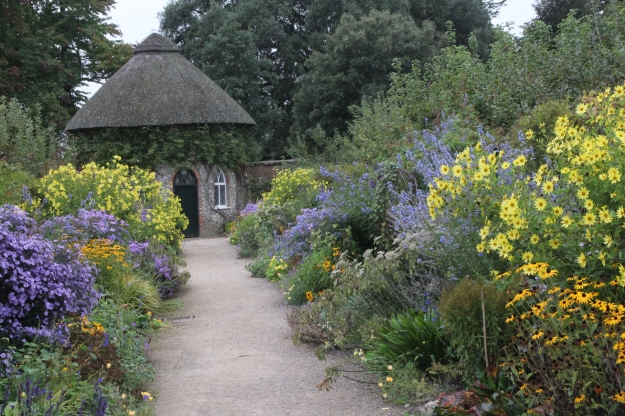 Having described (at some length!) Keith Wiley’s inspiring talk in yesterday’s post, one thing I didn’t disclose was where the talk took place, and the answer is wonderful West Dean.

I’ve written about West Dean before, here, and it really is one of my favourite places.  The combination of a first class garden (with flowers, fruit and veg and amazing glasshouses) as well as a fabulous college, offering numerous inspiring talks and courses, makes it a place I could happily adopt as a home from home.

When I visited on Saturday for Keith’s talk, I wasn’t sure whether I would write about the gardens again.  However, I’d brought my camera just in case, and a quick whirl around the walled gardens during our lunch break made it very obvious there was plenty to share, so enjoy! 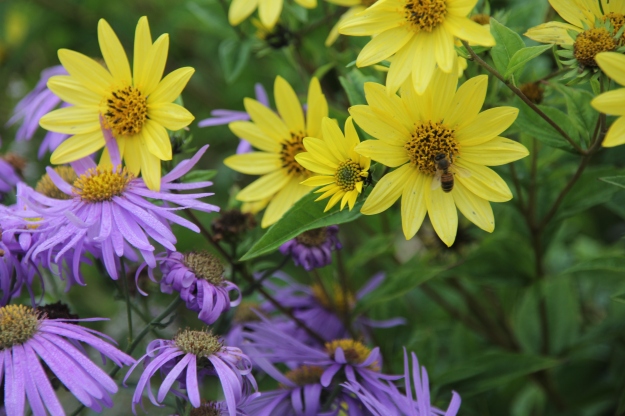 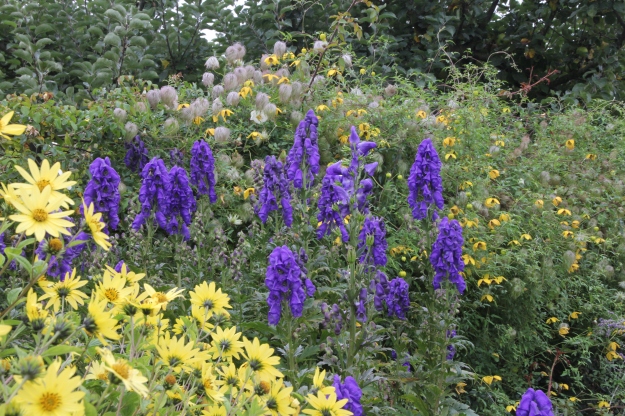 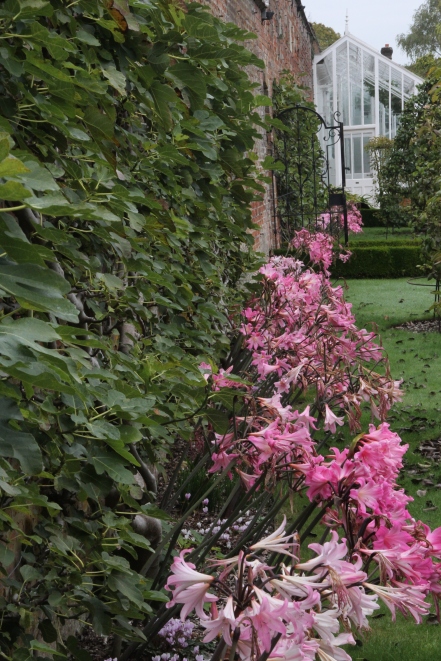 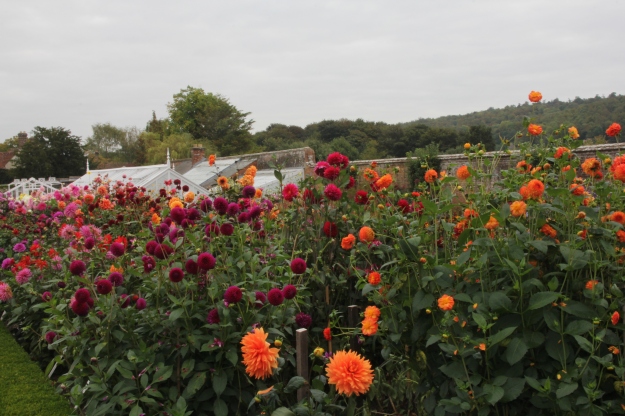 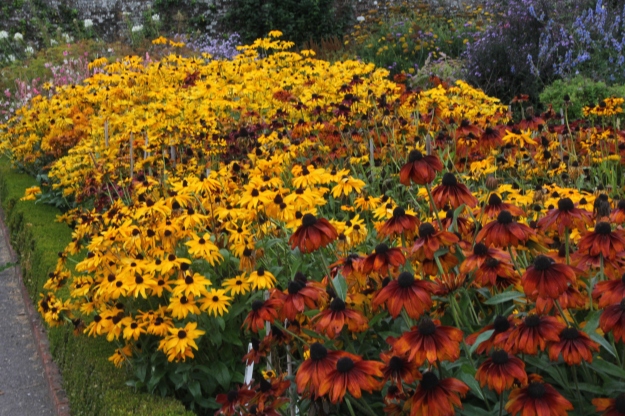 I loved this Dahlia – D. Fuschiana 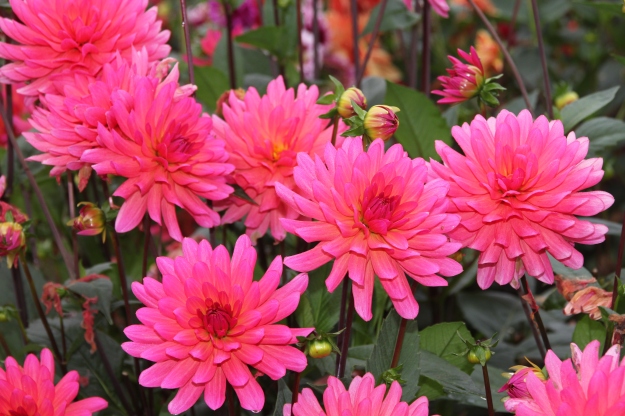 and this Zinnia, Z. Raspberry Cordial 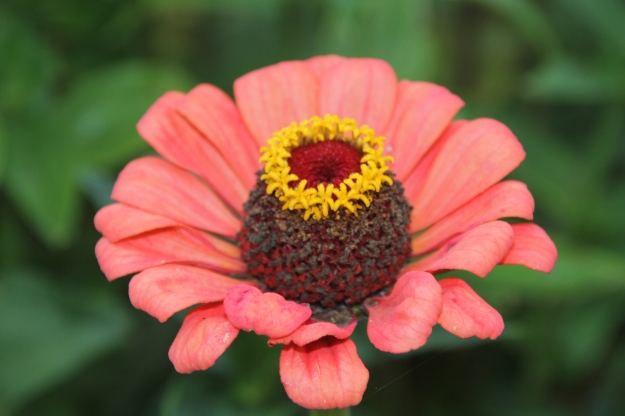 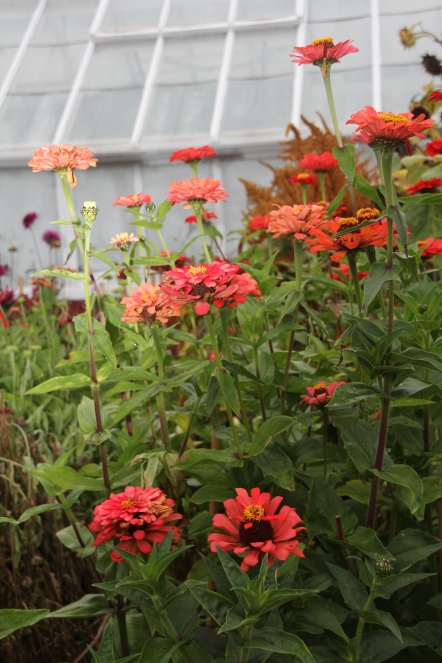 Perfect veg, as ever

with more to come

and a stunning array of pots to finish.