We’re just back from a rather mad London based weekend, attending two fabulous 50th birthday parties as well as my step niece’s wonderful wedding.

As some of you know, I have been fretting over the readiness of the bulbs I’d been growing for the wedding since my Advice please! post in February, and by Saturday morning I was all out of time.

The pots were tied with purple ribbon, packed in a big box and driven up to Chelsea to arrive by mid afternoon.  Carrying them all from the car to the restaurant where the reception was to be held was more than a tad scary, with the phrase ‘falling at the last hurdle’ spinning around my mind.  But I got them there without incident and arranged four to a table as agreed. 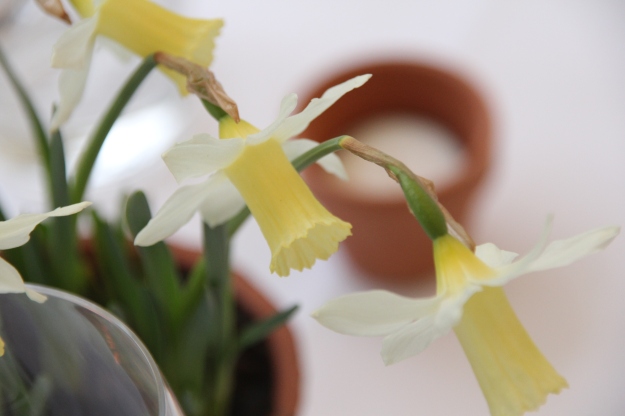 however, the Muscari Latifolium weren’t quite as advanced as I would have liked, despite a last minute move into the conservatory, but they provided a good contrast to the Narcissi, and were a lovely deep blue. 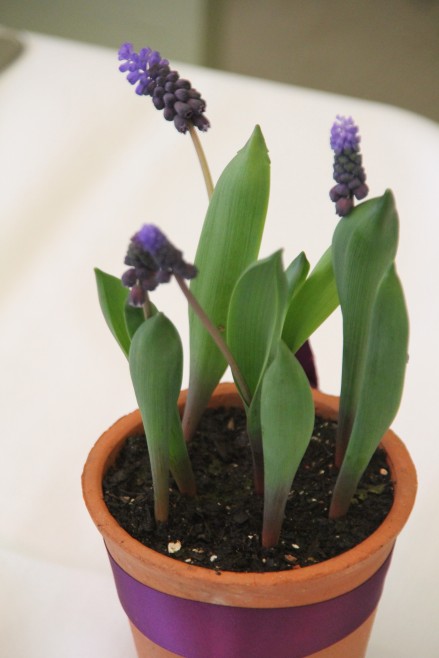 And the overall effect – well, judge for yourself! 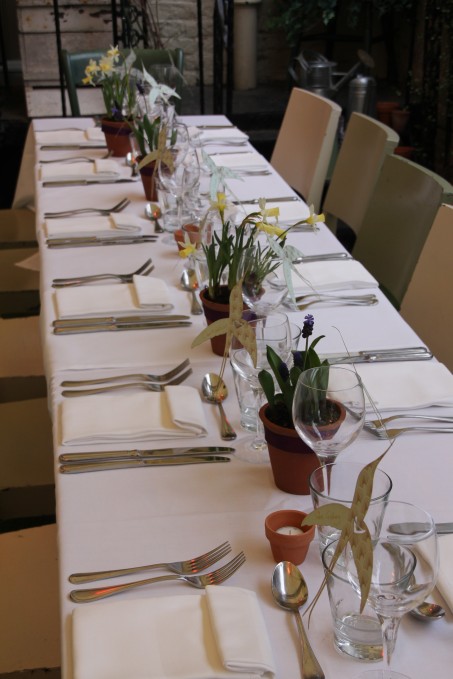 With thanks as ever to Cathy at Rambling in the Garden for hosting In a vase on Monday.  Cathy, I hope you’ll forgive me for posting my Saturday ‘vases’ on your Monday meme!

My sister’s lovely stepdaughter is getting married on 28th March and she (the sister) kindly volunteered me to provide flowers for the wedding.

We had a chat and agreed that spring bulbs in terracotta pots would be fun and go with the laid back vibe she’s looking for.  I did a bit of research and came up with two different bulbs, Narcissus Elka and Muscari Latifolium, both of which are supposed to be in flower at the end of March.  All was agreed and I got buying and planting.

Initially I left the pots in the greenhouse, just until they had sprouted and were hopefully beyond any marauders (I’m still smarting about those crocuses).  Then I moved them out into the cold frame.  The cold frame is never actually closed, so all it did was corral them and also provide a bit of protection.

Fast forward a few months and I have concerns.  The Narcissus are doing too well.  Although the stems are only about 4″ tall I can definitely see flower buds (see above and below).

Now whilst I don’t know how long they’ll take to flower from this point, I feel it won’t be four weeks, and so I have now put them in the fridge:

Whether the complete lack of light will make them etiolated, yellow and sickly looking, I don’t know.  Perhaps I could let them have weekends outside?

Conversely the Muscari seem very behind:

so I’ve now moved them back into the greenhouse.

The question for you, dear readers, is am I doing the right thing?  Is there somewhere else I could put the narcissi to delay them and, from the look of the Muscari, should I be moving them somewhere even warmer, like the south facing conservatory?

I look forward to any suggestions at all, including giving up now, and making a diary note to head to New Covent Garden on Friday 27th!