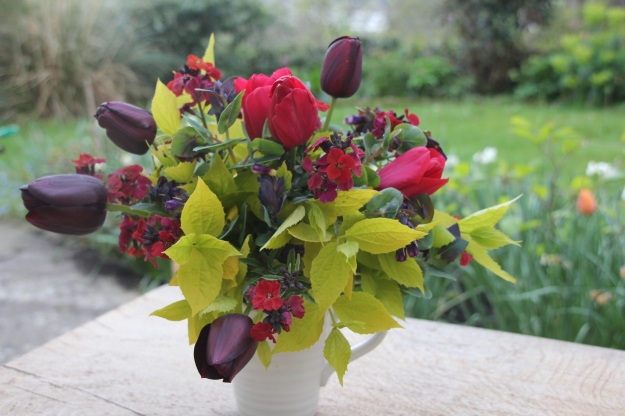 I made this little posy for my lovely neighbour, and, starting with the jewel like tulips, I thought I’d see where they led me. 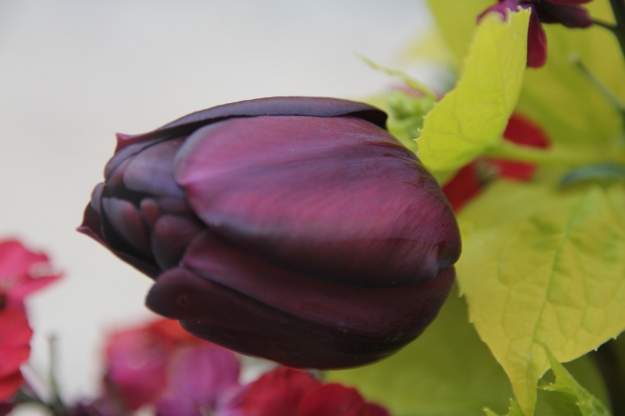 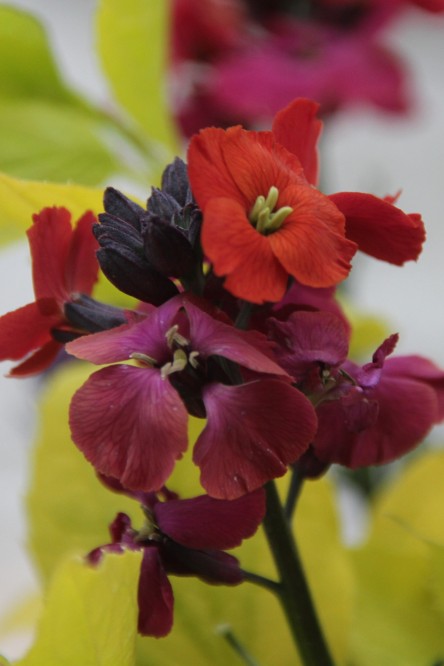 I feel like I’ve barely been here for weeks!  Firstly a lovely weekend away with my daughter and then a week in Italy has meant this last weekend has been the first I’ve spent on the island in a month.  Goodness know when all this happened, but look!  It’s all happened!

On a slightly more negative note, the dear OH, has occasioned this to happen.  The decking outside the office was becoming increasingly unsafe and, as we had builders in doing other work, he kindly instructed them to take the decking away.  I can’t say I’m exactly thrilled that we’ve lost our terrace just as the weather’s changing, but hopefully we can conclude discussions about its replacement and get cracking.  Hmm. 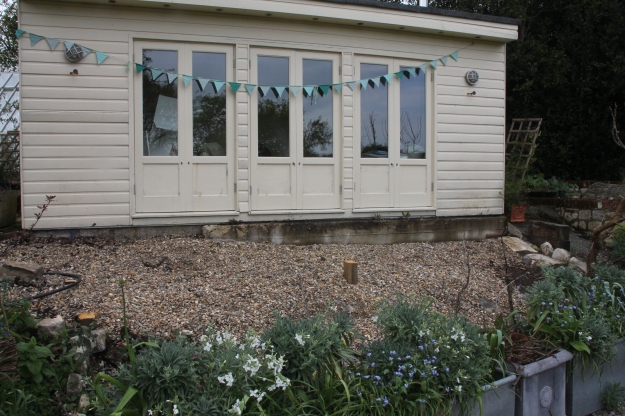 My absence has meant progress on the Veg Patch has been extremely limited.  There are some broad beans under the cover at the bottom but everything else is way behind – including the weeding. 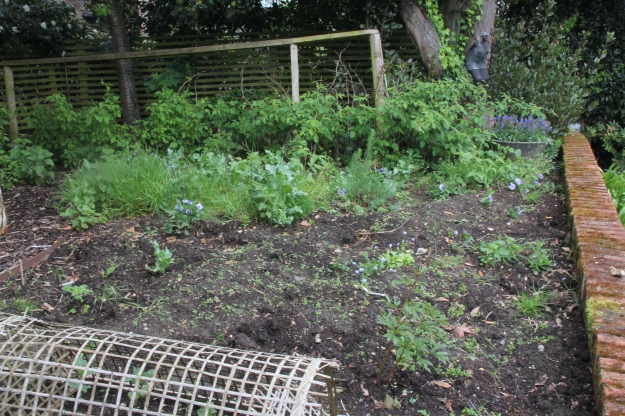 As previously noted, the Agapanthus in the strawberry bed are threatening to squeeze out the strawberries.  And the Diving Lady is looking increasingly like she needs a machete to find her pool.

In the Swing Beds, after last year’s dismal performance, the tulips have come up trumps.  The larger, blousier ones are T. Pink Impression, with the rather smaller, softer ones ‘Menton’.

In the Grass Bed the N. ‘Peeping Jennys’ are over and have been replaced N. ‘Lieke’ and T. ‘Green Star’.  Sadly many of the grasses (Stipa tenuissima) do definitely look like they’ve died over the winter.  I’m still deciding whether I’ll replace them or come up with another plan.

In the Mid Century bed I added ‘Night Club’ tulips to the existing ‘Merry go round’ and ‘Queen of the Night’.  These latter two are returning for their third year, which is great as so many tulips really aren’t perennial. 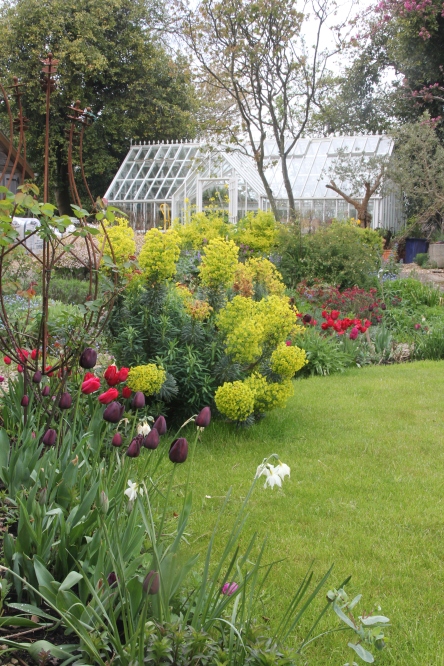 In the Bronze Bed the N. ‘Yazz’ are still blooming but the ‘Jimmy’ tulips seem to have largely disappeared this year. 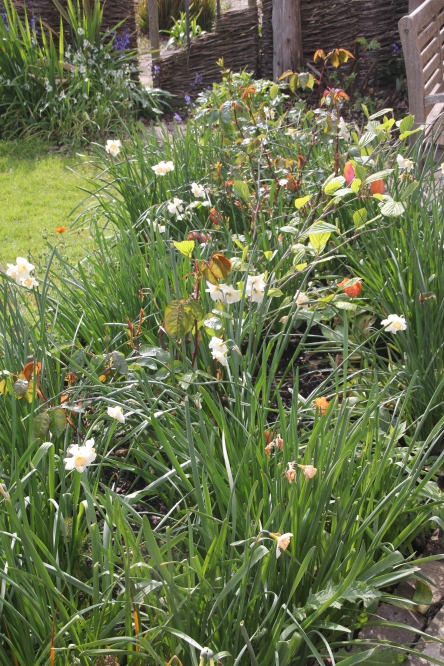 The Wisteria is out along the front of the veranda and the scent is heavenly. 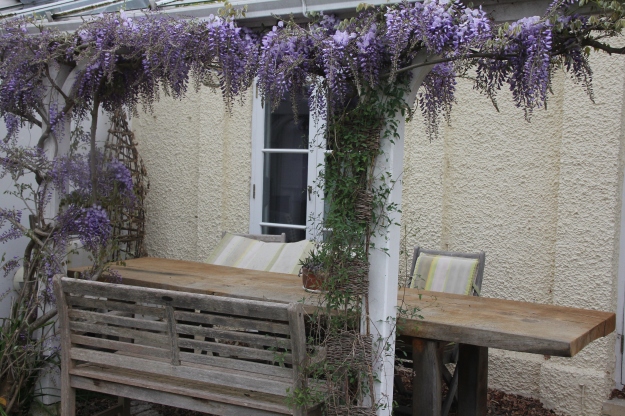 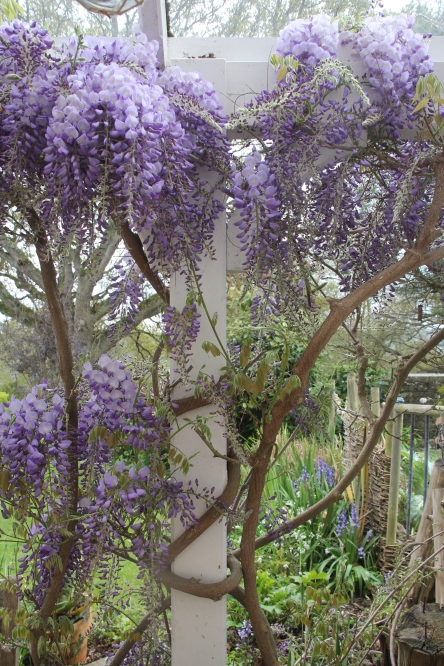 In front of the greenhouse I’m very disappointed with these tulips.  I’ve had the same Narcissus ‘Bellsong’ in these pots for years but have bought various tulips to accompany them.  This year’s ‘Mango Charm’, firstly, don’t look anything like the ones of the same name I bought last year, but also don’t look remotely ‘mango’ and are instead an insipid pink.  The one tulip I do like is the oddity which has turned up in the middle!

Inside the greenhouse is utter chaos.  Although I have moved out some tender plants since this photo was taken, there are still pots and pots getting in the way of seedlings and cuttings.

Even more sadly I still haven’t planted out my winter flowering sweet peas (languishing half dead in the foreground).  I was picking bunches by now last year.  Silly Jen.

In large pots I have various dahlias sprouting, including some new large orange ones to go in the bed outside the greenhouse. 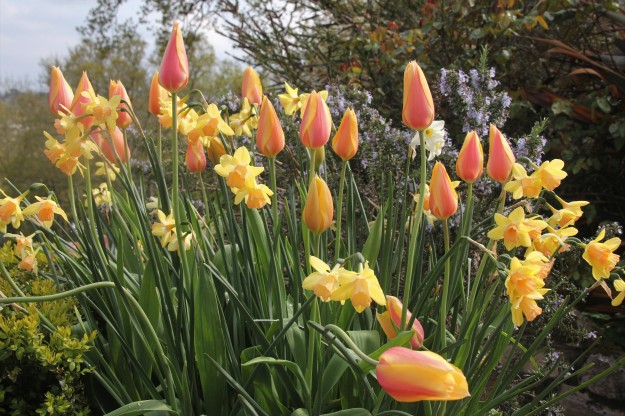 With thanks to Helen at the Patient Gardner who hosts our End of Month Views.

I cut a couple of branches from the plum tree to bring into the kitchen.

The tree’s never fruited so I didn’t feel I was sacrificing anything, but I’ve never cut them before so have no idea how long they will last.  Whilst wondering about this, and thinking I should really take them out of the Aga heated kitchen overnight, and what a faff, I thought, why not take them away all together?

As some of you know, this follows a rather bonkers tradition of arrangements created on the Isle of Wight and then moved to the mainland for Christmases and birthdays, so why not Easter?  And to be honest, it was a lot easier to transport than many, and also wasn’t jostling for space in the boot with presents and Christmas puddings,

We were popping up to Richmond for Easter Sunday to host lunch in our new little house so they came on the day trip with us, and have stayed.

Someone else also came.  But whilst he quickly made himself at home, he hasn’t stayed and is currently adopting a similar position having had a good but rainy run along the beach.

With thanks to Cathy who hosts all our Monday vases, however far they’ve travelled.