A rather autumnal shot to start this month’s Endof Month View,ispast the yellowing mulberry towards the swing.  This mulberry was in a pot for years and is still barely fruiting now despite  having its feet in the ground.

My mother in law was kind enough to buy me a Mulberry ‘Charlotte Russe’ (the RHS plant of the year 2017) for my birthday earlier this year and, as one of its attributes is supposedly early fruiting, it will be interesting to see if it overtakes this rather more established plant!

In the troughs the stocks grown from cuttings are looking much more established and there are still flowers on the Pelagonium.

Likewise the Pelagonium ‘Surcouf’ still has the odd bloom. 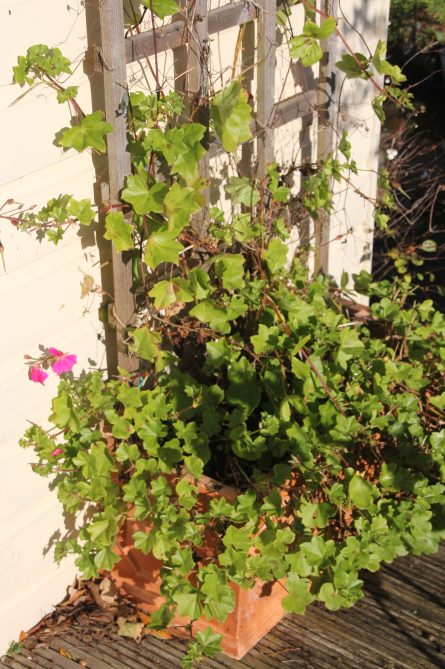 The Veg patch is in a state of general collapse and needs clearing and mulching, but at least the Diving Lady’s pool has been newly planted with Muscari. 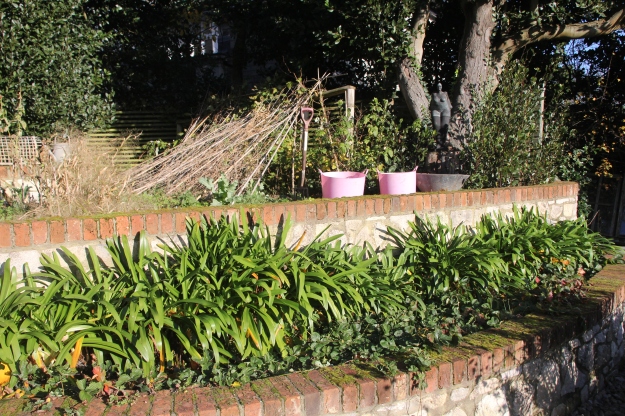 In the Swing Beds there is little to now see except the Salvias.

and rose hips –  I’m hoping the birds leave these alone so I can pick them for Christmas decorations. 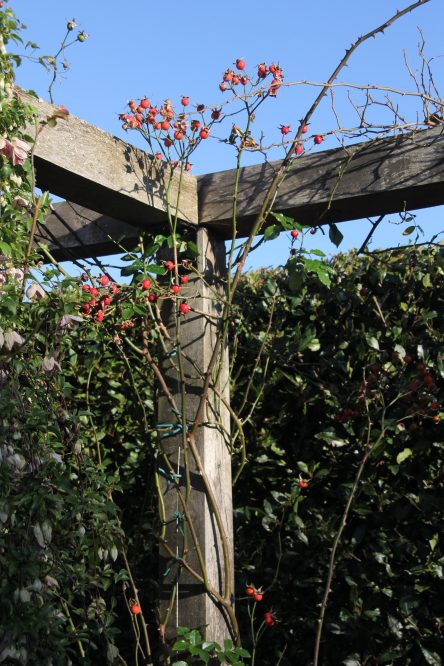 The Grass Bed was cleared a while ago and has now been planted with daffodils and tulips.  However, bearing in mind the thievery which went on last year, serious precautions have been taken.. 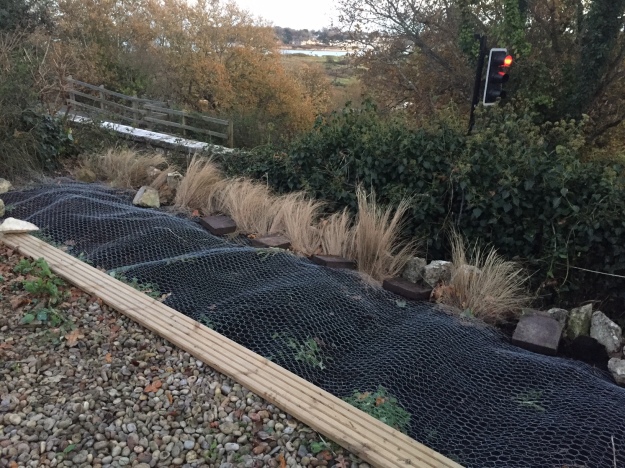 Walking past the house you can see the Rose carpet roses are still, rather incongruously, pumping out their bright pink blooms.

Past the tin bath and whilst the Osteospermum and Gazanias are shrugging off the chill, the rather crispy looking plant at the front off this shot is (was) a Chocolate Cosmos.  I really don’t learn as I’ve lost these plants before.  Whilst we’re blessed with a very mild climate here, they really are not remotely hardy.  (Note to self Jen!) 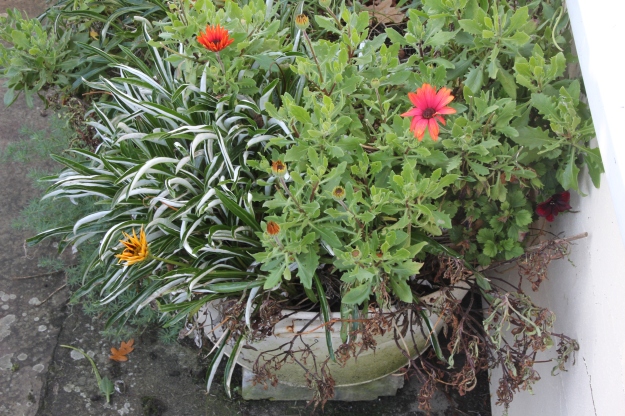 The leaves are nearly all off the Cercis, with just this pair clinging on in the sunshine. 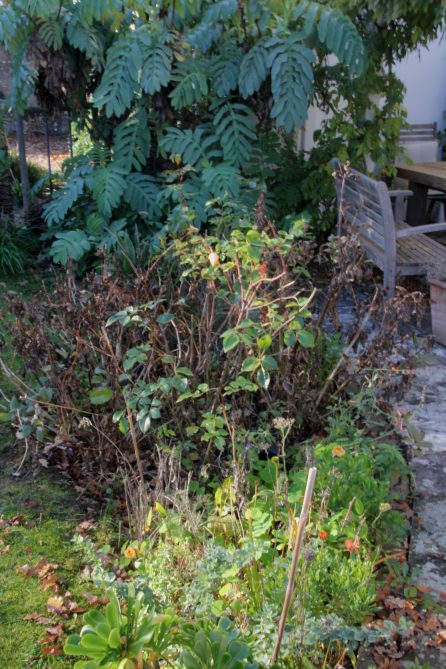 but in amongst there is still the odd jewel!

Climbing up the wooden support for the glass awning is this Clematis ‘My Angel’.  I bought it from a specialist Clematis nursery but sadly it’s been really disappointing.  The flowers, which are similar in shape to ‘tangutica’ but supposed to be tawny/orange (to match the Bronze Bed which is directly in front) turned out to be rather insipid in the flesh, and also really small.  Not surprisingly, the seedheads are also really small which is a shame as I think they’re lovely in arrangements but I don’t think these would really work.

The jury’s out as to whether ‘My angel’ will get sent to plant heaven! 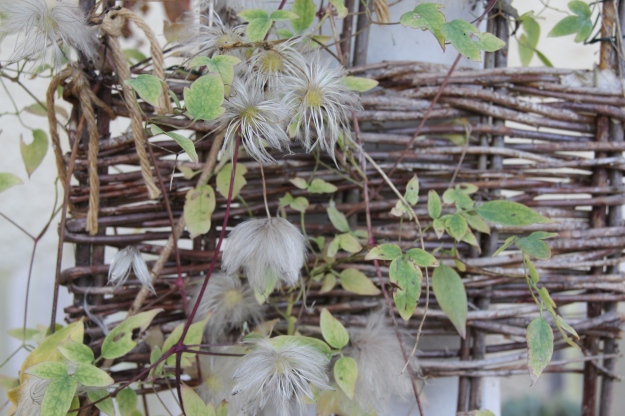 The succulents have now been tucked under the glass awning but I think if really cold weather is forecast that won’t be protection enough and they’ll need moving again. 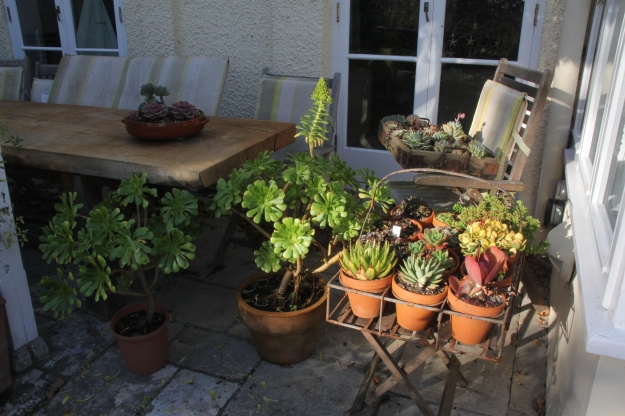 This sink, however, is currently still out in the open and, having only been planted up this year has filled out really well.  In my enthusiasm to show it off, however, I did completely miss the enormous nettle in the bed behind.  Oops.

Here’s yet another pink Pelagonium, this one bought on the cheap from Waitrose.  It’s a perfect match for the Flower Carpet roses so I’ve just taken a whole lot of cuttings with the view of filing a big pot of them next summer.

Into the greenhouse and the banana (not my purchase!) is annoyingly looking better than ever 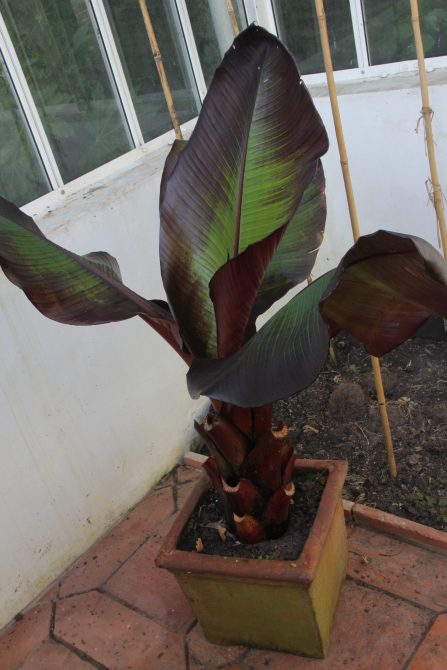 and there are plenty of cuttings coming along well.

One thing not looking so good is the state of the glass.  I hate cleaning the greenhouse (let’s face it, I hate cleaning) but this is definitely something on the jobs list

together with barrowing all this around

oh, and still planting the rest of these: 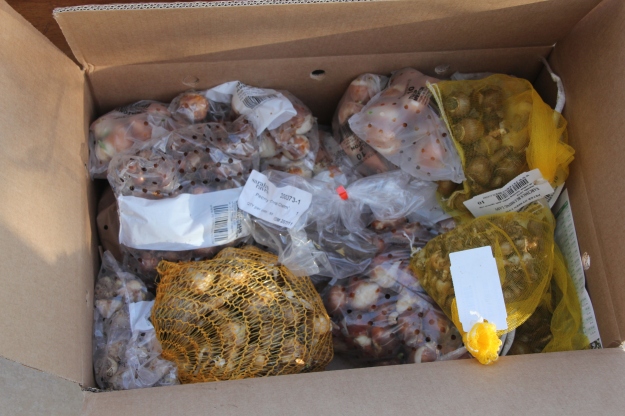 With thanks to Steve at Glebe House who hosts EoMV. 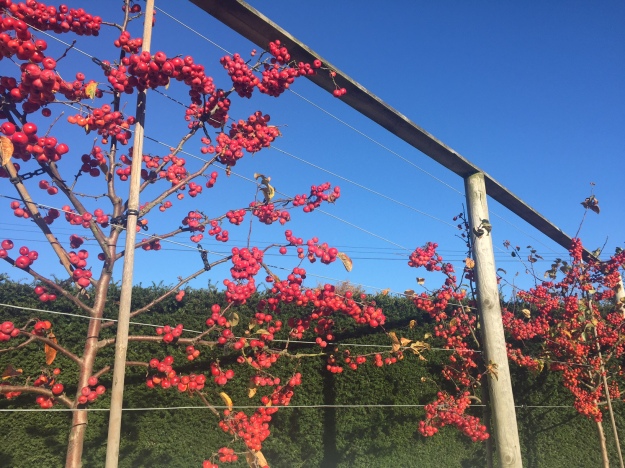 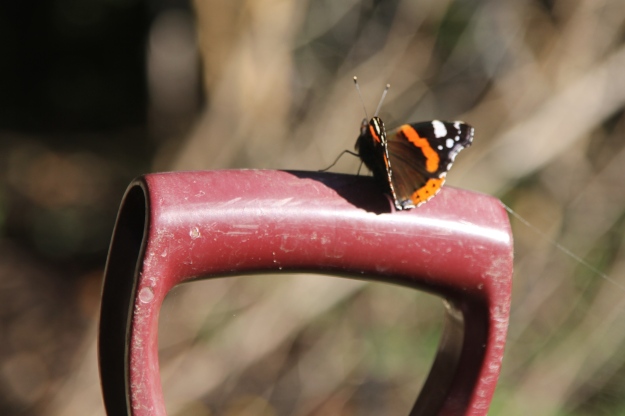 (Taken a couple of weeks ago)

I was all set to blog a ‘woe is me’ post about my unplanted bulbs, but, one of the joys of blogging is being able to find records which, if in a random notebook, would have been long lost.

Consequently, courtesy of a post last November about spending most of a weekend on a college project, I can comfort myself with the comment “Meanwhile, shame about the bulbs still sitting in the box they were delivered in a fortnight ago….”, dated 20th November.  Yay, I’ve got a week to go!

Meanwhile, so much easier (particularly when it’s dark!) to create spreadsheets with planting plans and blooming months, than actually getting out there and getting them in! 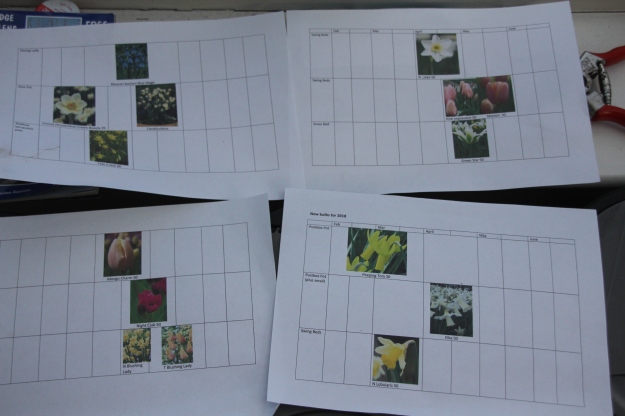 Chuffed with my little glass vase from last week (not least because pickings are somewhat slimmer and shorter at this time of year) I’ve produced a similar arrangement today – even re-using the Phlomis which was still in perfect condition.

The Nasturtium (Caribbean Crush) had self seeded in the Bronze Bed, 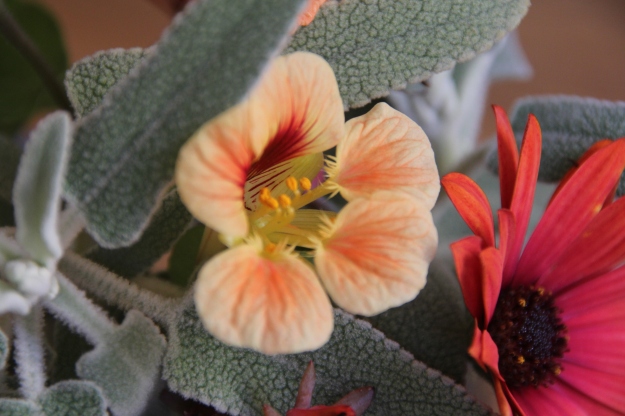 whilst the dark Osteospermum ‘Serenity Rose Magic’, is still flowering away in the metal tub. I did take some cuttings a couple of weeks ago but it looks like only one has taken, so I really should try more before it’s too late.  The lighter Osteospermum, seen in the top photo is also from the Bronze Bed, but it’s a bit of a mystery as to how it got there and what it is! 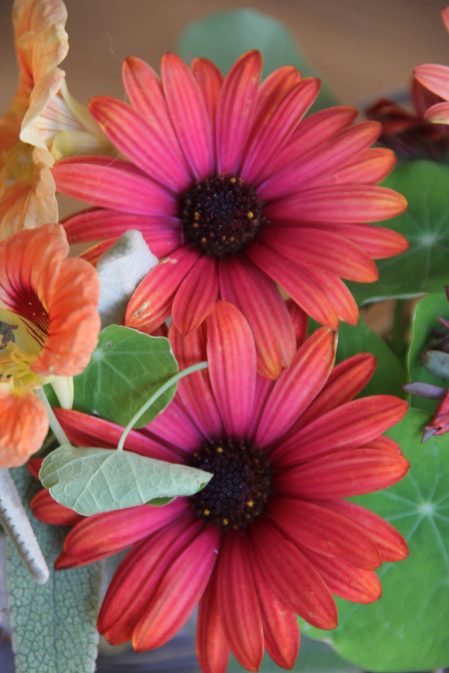 To top it off I added some blooms from an Echeveria.  Can’t say I’ve ever thought to cut them before, but they’re doing fine so far and I think add rather funky ‘spidery’ accents. 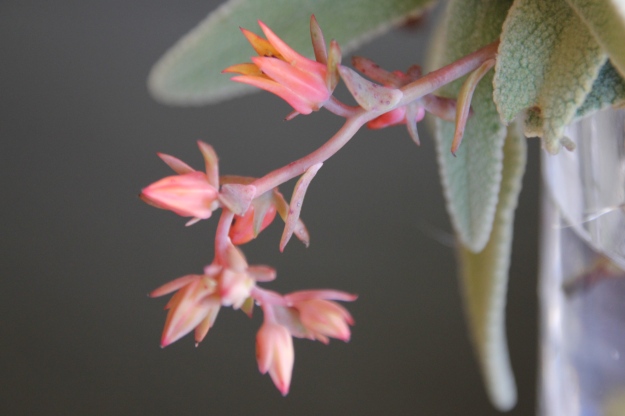 All in all, a rather perky arrangement for mid November!

Why don’t you pop over to Cathy’s Blog to see what others have found for their vases on this, the 4 year anniversary?

In general, I think people who love autumn are a bit strange.  To me it seems a negative, downhill time of year, but on a day like today when the sun’s shining, the birds are singing and the garden’s not yet a soggy, decaying mess, I’m prepared to cut autumn some slack. Even more so when I can pop into the garden and still rustle up a small vase of pink lovelies.

a random (out of focus) Pelargonium, 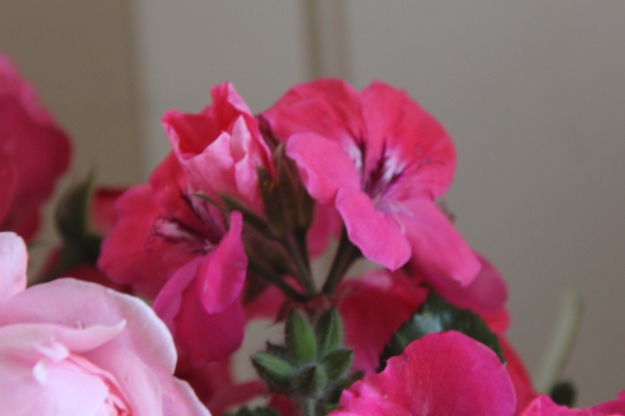 and plenty of bright pink Flower Carpet roses, as well as three stems of silvery Phlomis italica for foliage.

Why don’t you pop over to Cathy’s blog to see her spectacular fireworks inspired Monday creation?

I’ve blogged numerous times about the St Helens Duver – the National Trust owned area of heathland opposite where we live – but not recently.  (For a while I contributed regularly to a wildflower meme, and you can see the posts by selecting the ‘Wildflower Wednesday’ category).

Sunday’s sunshine, after Saturday’s grey, was such a treat I’m taking you on the usual circuit and sharing a few wild flowers along the way.

These hips are so fabulous I’d be tempted to pick a few, but they’re on a bramble clad bank between the path and the road and therefore completely inaccessible.  I’ll just have to admire from a distance. 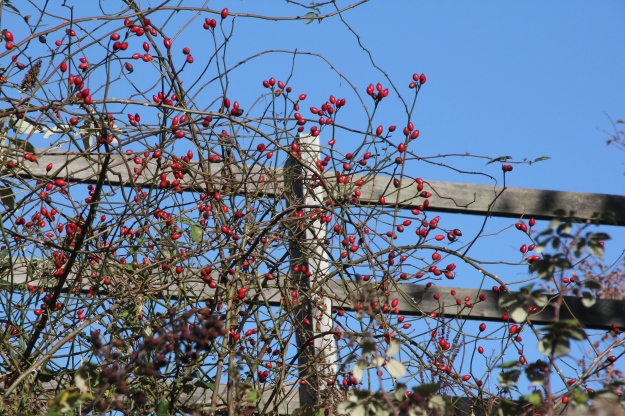 Further down the path, looking right towards the Solent I just caught this yacht heading out,

whilst looking the other way, I spied a number of glowing Iris foetidissima seed heads.

At the bottom of the path, looking back across Bembridge Harbour, you can see over to Brading Haven yacht club.  There was plenty of activity there today, but rather them than me.

(I did actually sail a lot in my twenties, including racing back from Lisbon to Southampton, and from Aarhus in Denmark across the North Sea and round the top of Scotland to the Clyde.  These days I’d generally rather be on dry land, but seeing the jolly sails on such a beautiful day did start to make me wonder….)

The grassland above is one of the sites of the fantastic drifts of sea thrift Armeria maritima during May, which I’ve blogged about here.  There are still a few clinging on,

together with the odd chamomile – I think this is Chamaemelum nobile.

Rounding the corner and onto the beach I saw the dinghies has beaten me there!

And, while I’m diverging from the flowers, just thought I’d share a picture of Nimbus, in honour of his upcoming ninth birthday. 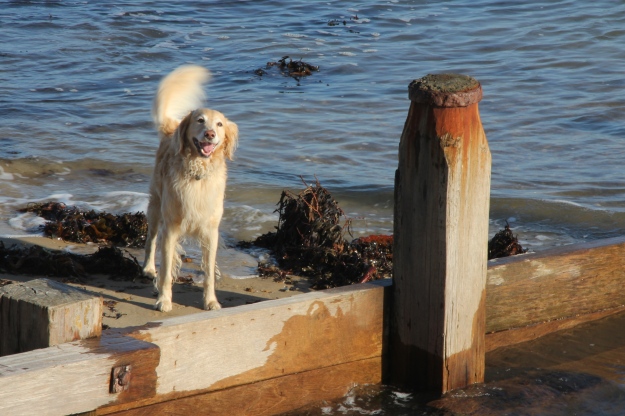 And finally, also nothing to do with flowers, anyone else devastated by tonight’s Strictly outcome?