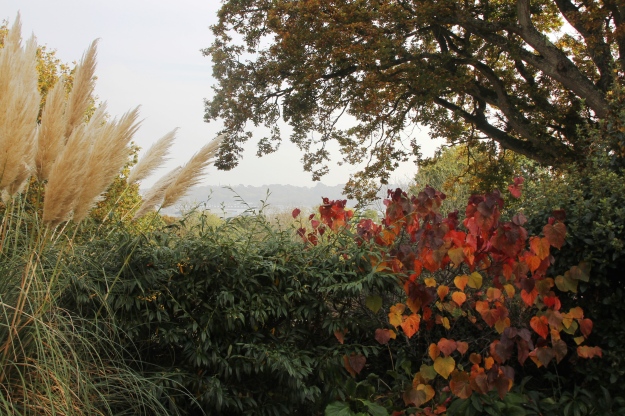 It’s beginning to look a lot like… autumn.  The over the road oak’s papery leaves are just starting to fall and the autumn tints of the Cercis canadensis ‘Forest Pansy’ are showing off the beautiful heart shaped leaves.

Elsewhere at this side of the garden my beautiful Dahlia ‘Happy Single Date’ has completely given up the ghost and there’s not much to admire in the Bronze Bed except the wonderful Melianthus major in the background.  In the centre you can see part of the ribbon of Carex buchananii grasses grown from seed and planted out this year.  The idea was that they would remain evergreen (ever-brown actually – my mother in law thought they’d died) and provide interest through the winter and combine well with the Hamamelis before the bulbs. It will be interesting to see if this works, or whether they do indeed just look rather dead. 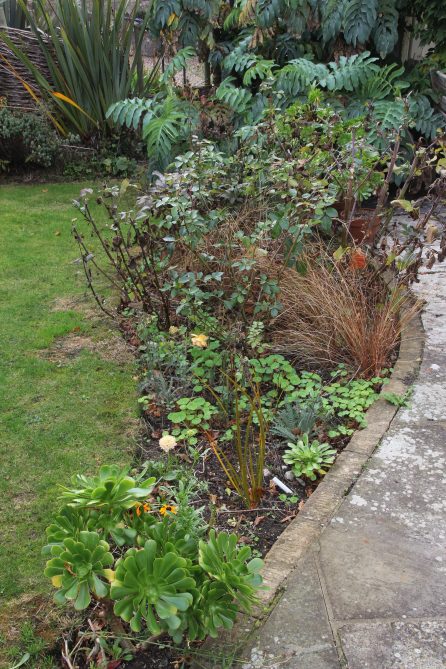 Across to the eastern end the Swing Beds are still green but really not very colourful apart from the Salvias.  As well as some late colour, after completion of my planting course last year I’d really like to introduce some better structure here.  I’d deliberately not planted anything shrubby to the back of the area immediately either side of the swing because I grew sweet peas up netting at the back for a few years.  However, they’ve never done that well and so this year I didn’t bother and think the lack of height here – particularly bearing in mind the size of the Phlomis and Elaeagnus further out – is a problem.  But what to plant?  Hmm. 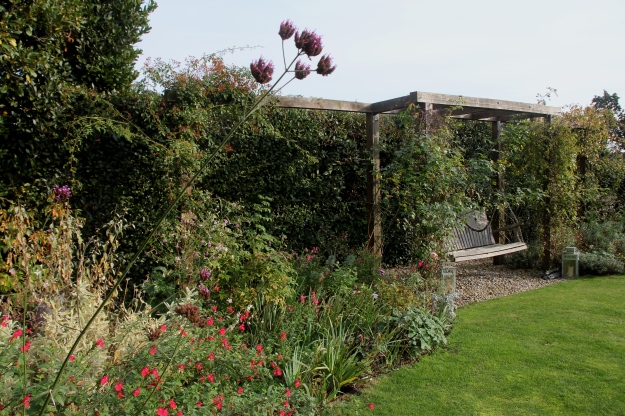 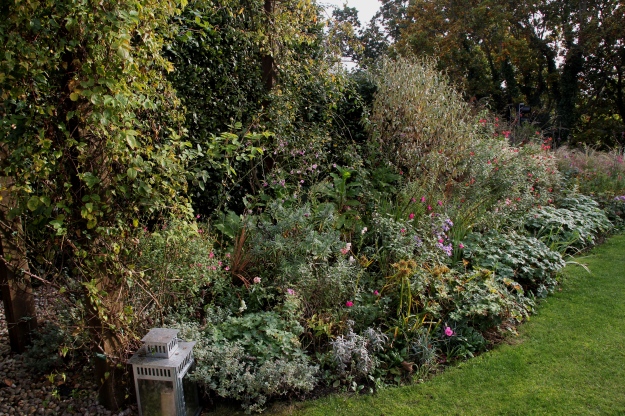 The plan for the grass bed this year was to have a froth of Cosmos and Ammi, but I planted some Calendula along the front edge to cover up the gaps until the other two got going.  So where are we now?  Er, completely overrun with self seeded Nasturtiums!  I really must dig these out as I do love the forget me nots in this bed and at this rate there won’t be any. 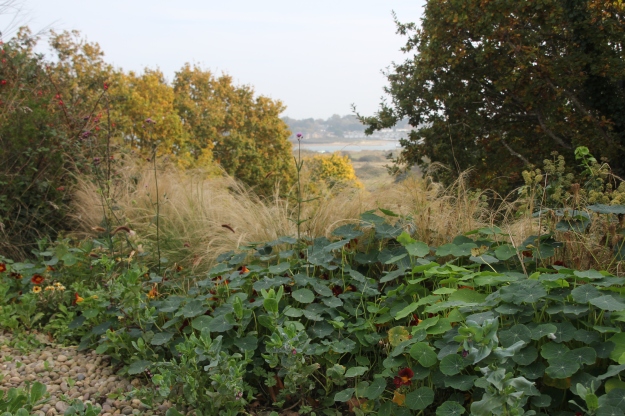 These two make a pretty autumnal combination, but so not the white effect I’d planned! 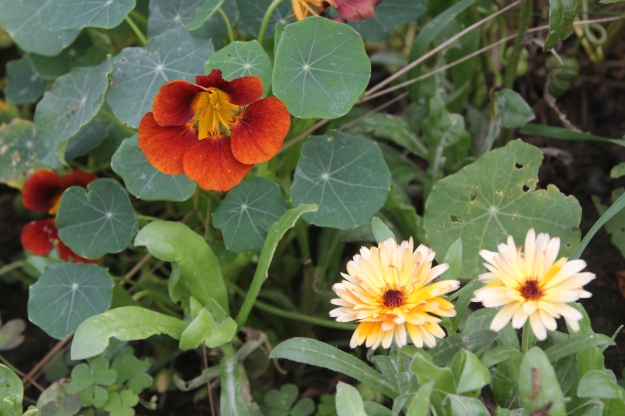 The Salvias are making their mark in the Mid Century Bed too, but I also like the dark Antirrhinums – A. majus nanum ‘Black Prince’ and there are still some dahlias and even roses coming.  Plenty of new Cerinthe growth too, with the odd plant actually in the bed rather than the paths! 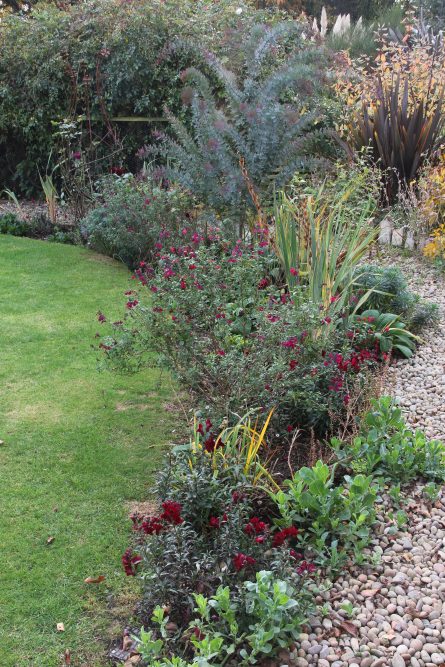 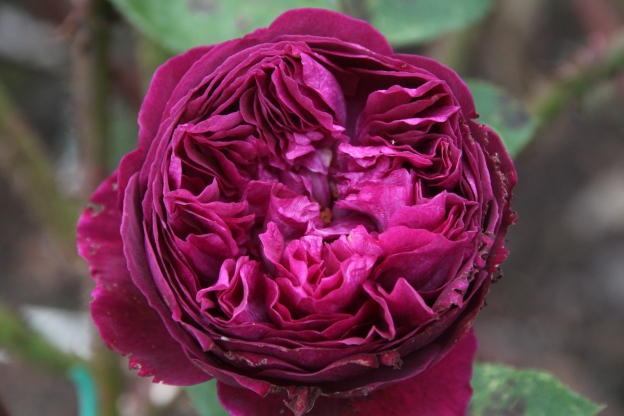 In the Veg Beds there’s not much to see except the Kale.  I do love the look and colour of these leaves, and have even used them in arrangements, but they do give a rather cabbagey aroma which is less than ideal! 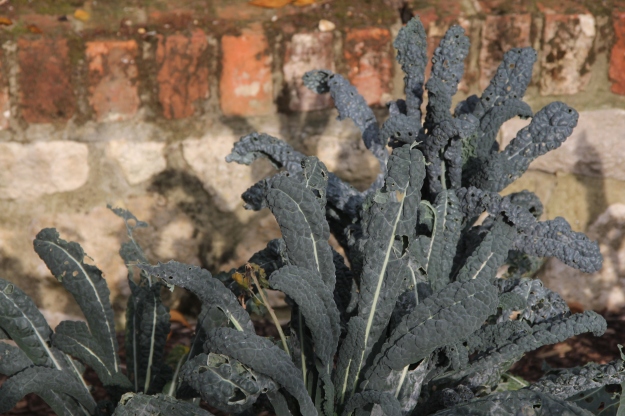 In pots there are plenty of Pelargoniums still pumping out the flowers including this beauty P. Surcouf, 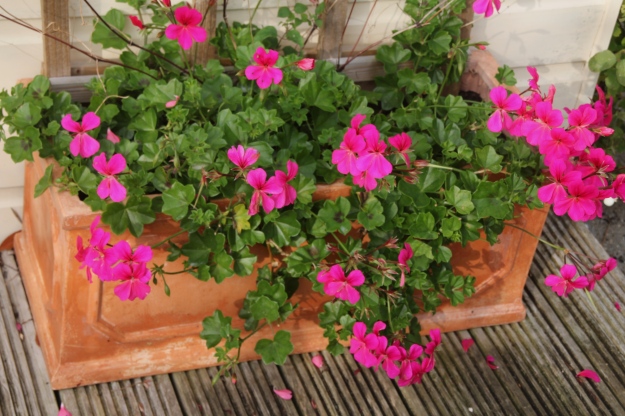 and a number of succulents having a late bloom 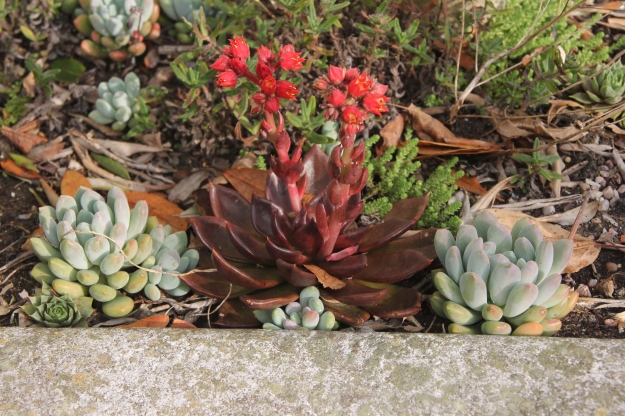 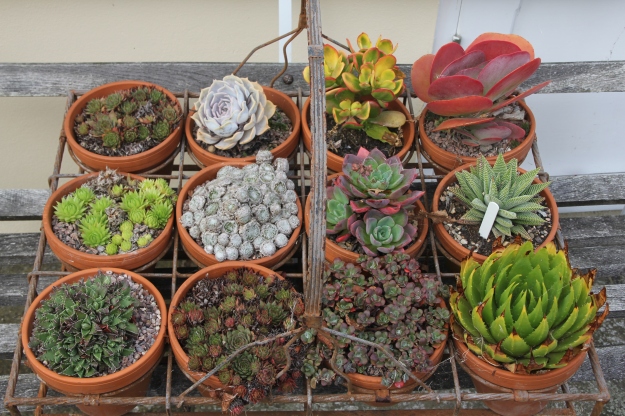 The raised Cutting Beds have been pretty hopeless this year due to lack of water, so rather a shock to see the Zinnias pumping out the flowers now too. 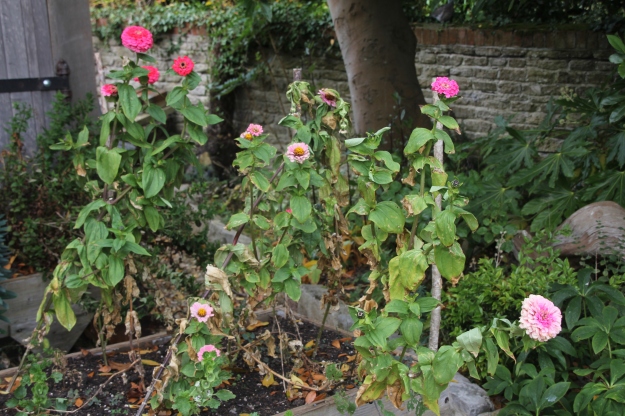 To the right of the raised beds you can see the Shady Bed which looks much the same as always except the gradual increase in size of the Sarcococca confusa.  This is finally making its mark both in looks now and scent later in the winter.  Perhaps I’ll even allow myself to cut a few sprigs next year. 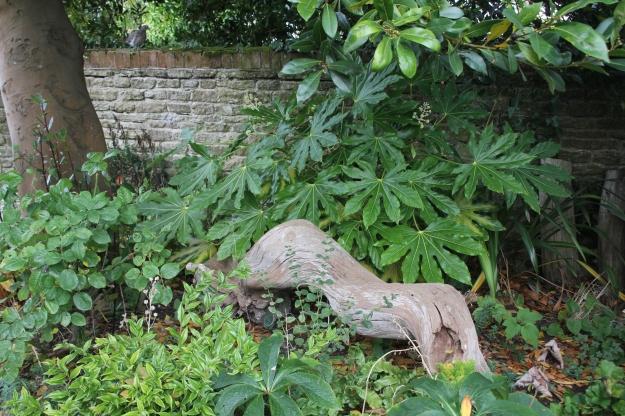 And to finish, the greenhouse.  Whilst the veg in here are coming to an end 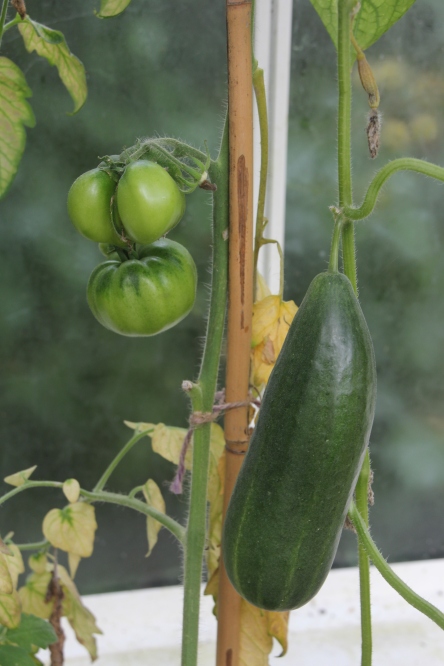 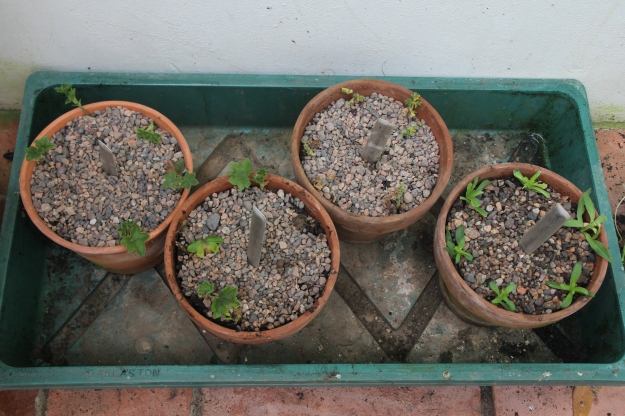 but also Winter Sweet Peas, still in the packet as I type, but I can’t wait to see these again come next April! 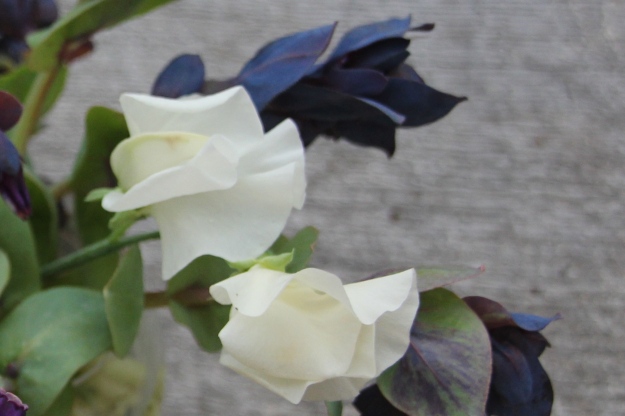 With thanks to Helen at the Patient Gardener for hosting everyone’s EoMVs.