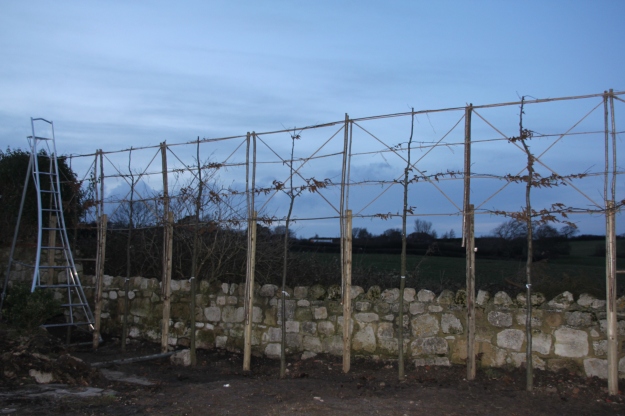 Only very long standing readers will have seen this picture of the hornbeams we planted in a neighbour’s garden in February 2014 (posts here and here).  Unfortunately, in the intervening two years they have had no further attention.

This morning, with the sun shining and the realisation that they were definitely overdue a visit, they looked like this.  Not only seriously shaggy, but also, in many cases, no longer attached to their frames. 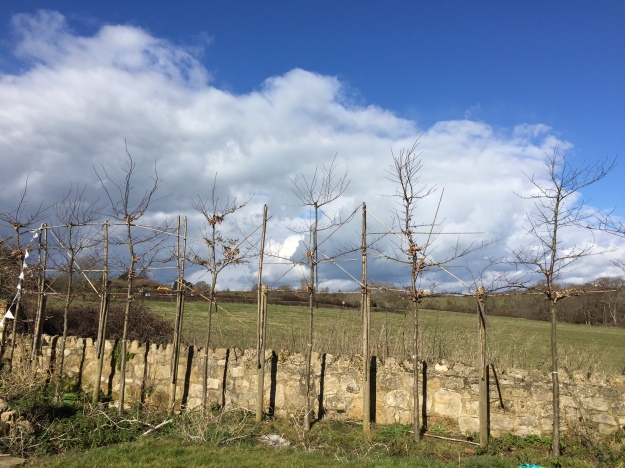 I set to with my secateurs at the left hand end, cutting back to the eight horizontal branches coming from each trunk.  And at the same time, the OH started at the right hand end, attempting to fix the frames in situ.  Not an easy task.

After an hour and a half (and a sleet storm) I could no longer feel my fingers and  I’d snipped as much as I could.   I had also run out of the brilliant rubber covered metal ties I was using, as well as any more frames robust enough to attach my newly streamlined branches to, so I left the OH fiddling with wire and bamboo and went in for lunch.

I’m slightly concerned that the ‘after’ photo below is looking rather a lot like the before one at the the top, but as the OH commented, ‘we’re talking a ten year project.’