It’s a family joke that the OH likes gladioli and I don’t.  On (rare) occasion he will buy me gladioli as cut flowers just to see my reaction, which I’m afraid is never positive.

However, my view towards ‘gladdies’ has softened somewhat since coming to the island, as we have inherited the species gladioli, Gladioli byzantinus, (shown here with my Melianthus Major in May last year).  These flowers are rather more dainty and airy and also fill a slightly difficult gap after the tulips have finished flowering, and as a result I’m seriously thinking of planting some in the Swing Beds for next year.

Clearly, the top photo does not show Gladioli byzantinus, but instead Gladiolus Black Star, bought as corms by me this year, for the new Mid Century Bed.  To be honest they were a bit of a joke – I stumbled across them in the garden centre and bought them to charm the husband (whilst also thinking they’d suit the ‘bruised’ colour palette I had in mind for that bed).

They were duly planted in early March, and before too long the strap like leaves were showing as healthy clumps at the back of the border, but whilst the Ranunculus planted at the same time came and went, still there were no flower spikes.  I thought perhaps they’d take a year to settle in, and was quietly a little relieved.  Phew.

And then there they were, multiple flower spikes all along the bed, there was no escape, they were coming.  And here they are:

I have to admire their sheer scale and majesty, and the colour is fabulous.  But do I actually like them?  Hmmm.  What do you think?

And to finish, a correction.  Blogging has got a little more complicated since I’ve been back at work and I’m quite often blogging when I’m not even at home, accessing photos taken a day or so earlier. But to confuse this, in last week’s Garden Bloggers’ Bloom Day,

The first photo actually shows my Centaurea cyanus Black Boy, not a Dianthus at all, whilst the second is Dianthus barbatus Sooty, also grown from seed, but not exactly flowering yet.  Sorry!

I think I’d better go and edit it out…

Whilst many of my roses have already gone over – hastened I assume by the very dry weather – these Rosa Flower Carpet are still going strong and, if prior years are anything to go by, are likely to continue until well into October.

There’s this new one too, featured last Wednesday, but worth another peek – Rosa Jubilee Celebration.

And one more rose, also in the Mid Century bed, Rosa Falstaff climbing, growing up the obelisk with the Rhodochiton atrosanguineus.

One plant I’ve always loved is Agapanthus and I’m thrilled that one I’ve grown from seed is finally flowering.  I planted out dozens in both the greenhouse ‘Med Beds’ and at the back of the strawberry bed.  Sadly it looks like this is the only one to flower this year, but hopefully more will follow in the future.

This white Agapanthus I’ve had for years and is growing in a pot, thriving on neglect.  I’ve also grown seedlings from this plant which I need to work out where to plant.  Perhaps they are better in pots?  I’ve read that Agapanthus flower better when their roots are constricted, but then I’ve read that’s not true too!  Any thoughts? 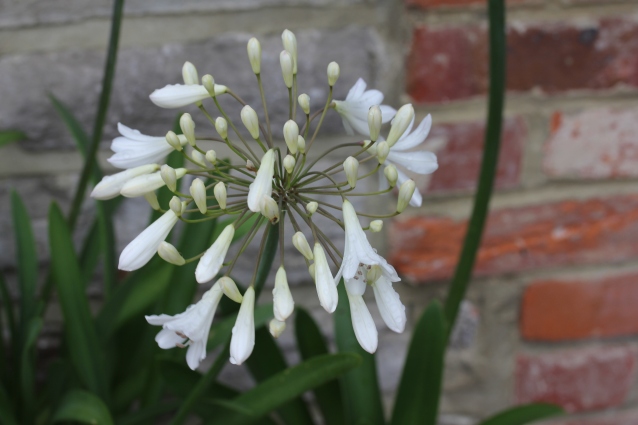 Another genus I’m having a good year with is Dianthus.  I bought a couple of this one last year (sorry lost the name), but they didn’t do so well, and, despite their sweet scent I wasn’t impressed,  However, this year, they’ve clearly got their roots down and have done brilliantly. They’re great in a vase and last and last.

This one, Dianthus carthusianorum, sown as seed last year, is finally flowering in the Swing Beds.  I really like the clear colour and the strong, wiry stems.

And lastly this Dianthus Green Trick, also great in a vase.  This was bought as cuttings from Sarah Raven this spring, and then I grew lots more from cuttings.  I really should take some more cuttings as the colour is so green and fresh at this time of year when so much foliage is looking tired.

Another new plant grown from seed this year are these ‘Ten weeks stocks’.  I’m not usually a fan of mixed colours, but so far they’ve all been lovely, and, like the Ruby Punch Stocks featured in yesterday’s In a Vase on Monday, smell gorgeous.

Lastly, a couple of plants in new pots created this year in front of the office in the garden. This Clematis is Princess Diana,

planted together with this Pelargonium Surcouf.

With thanks to Carol at May Dreams Gardens  for hosting everyone’s GBBD. 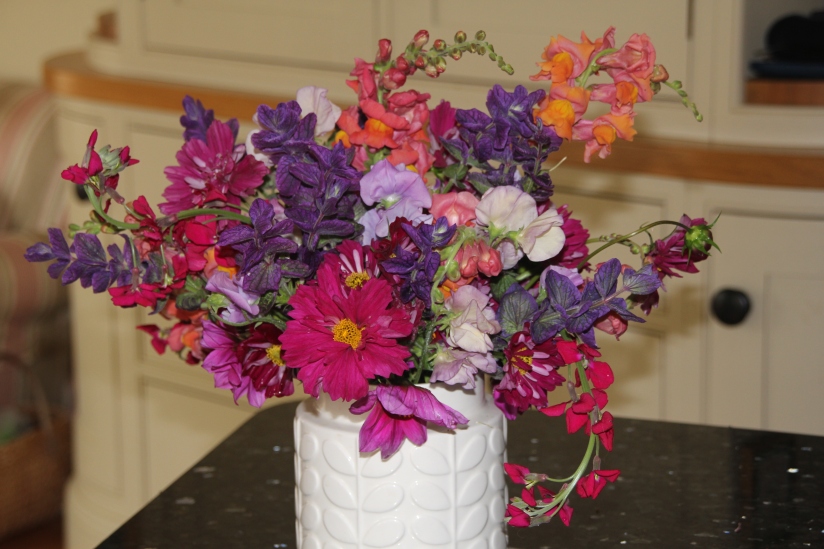 I’m late in the date joining Cathy at Rambling in the Garden for ‘In a vase on Monday’ as although I’d picked my blooms yesterday (in the rain) I needed to do some work before I found time to arrange them. 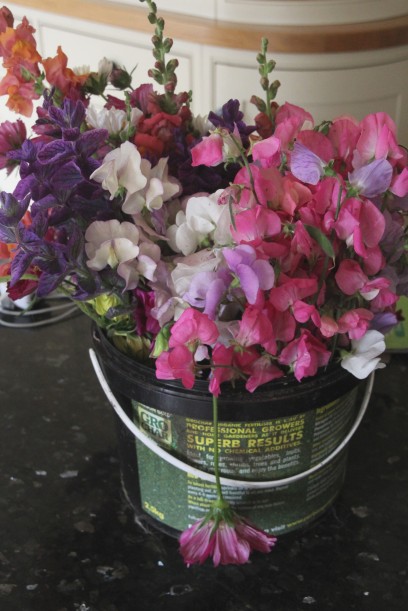 All of these blooms were picked from my little cutting garden on a plot I’ve ‘borrowed’ within a walled garden down the road.  I meant to take my camera to show you how it’s progressed since I first blogged about it here, but completely forgot.  Hopefully the output will give you a clue!

Looking at my bucket of goodies I decided to go for two themes – one mad and bright for the kitchen table and the second rather more serious to take up to work in London tomorrow.

For the first, I chose my beautiful Orla Kiely vase given to me last Christmas by my awesome big sister (with exquisite taste).  The vase is deceptively roomy and certainly gobbled up all the flowers – lucky I had so many!

A couple of flowers were new to me this year, firstly the Antirrhinum majus Orange Wonder.  This was grown for the new Bronze Bed, but in the end I decided I had enough there and planted it in the Cutting Garden.  Now, I’m loving it so much I’m wondering whether I could move a couple back into my garden! 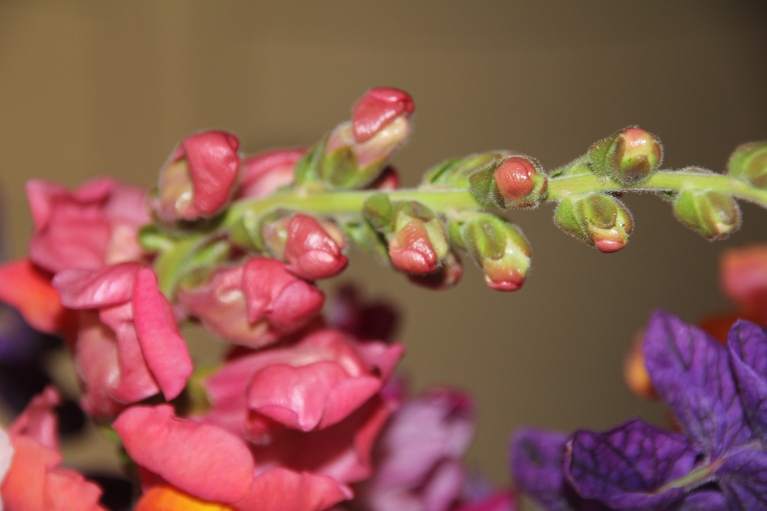 Also the Stocks ‘Ruby Punch’, which were grown from seeds from Plants of Distinction.  These were grown for the Mid Century bed, but germinated really well so I planted some leftovers in the Cutting Garden.  They definitely need staking which I haven’t done, and so they’ve ended up decidedly kinky, but they still smell divine.

As well as these two newbies, there is plenty of the stalwart Salvia horminum Oxford Blue, 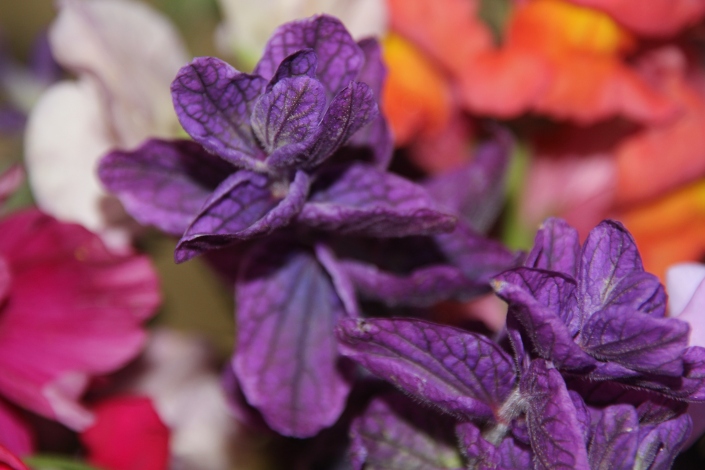 For my little work vase I chose a white and yellow theme. 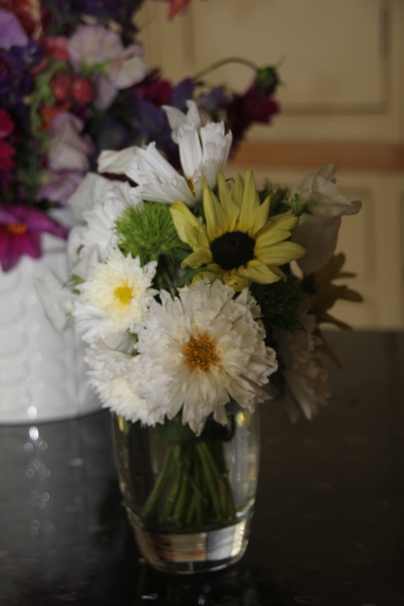 This included the first of my Helianthus Vanilla Ice

as well as Cosmos Double Click Snow Puff.  I think both this very double one

and this one, are both Snow Puff.

As always I’ve had great fun with my vases.  Why don’t you go over to Cathy’s and see what everyone else is up to? 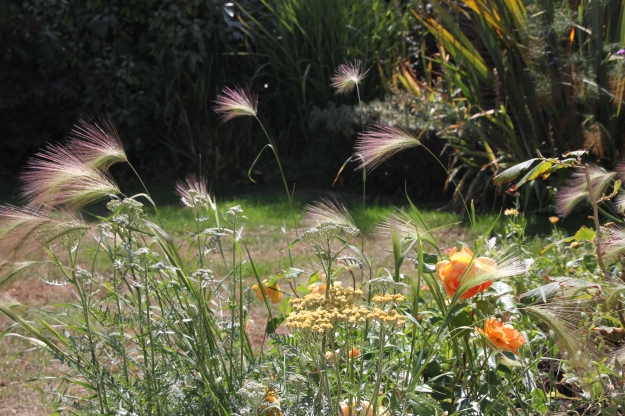 Today I thought I’d focus in a bit more detail on the new beds created this year.  I took the view that I didn’t want to spend a fortune on plants (although the roses were clearly an exception!) so I grew a lot of plants from seed.  As a consequence, it has taken a little while for the bed to get going, but you can see from the picture below at the end of March, what can happen in just over a couple of months.

Sadly the whole bed has got rather droughted (especially the hamamelis, H. Aphrodite, which now has very crispy leaves) but I think a couple of good drenchings have saved the position, and things are looking perkier.

The initial planting in the photo above left shows the Calendula ‘Sunset Buff‘ grown from seed last year and the small Libertia peregrinans,  I added some more C Sunset Buff grown this year, but all have suffered with the drought and become rather mildewy.   The photo below shows them at their peak a few weeks ago –  I do like this soft apricot colour.

As well as the calendula, I planted seedlings of Eschscholzia “Cameo Dream”, but these too have struggled with lack of water.  I’ve definitely lost a few and have yet to see any flower, which is a shame, as it’s a lovely, jolly flower I remember fondly from my childhood home, so I’d like to try to establish it here.

More successful has been the Nasturtium Caribbean Crush.  These echo the colour of the Calendula, but are shorter and so have been planted nearer the edges of the bed.

In the photo above you can also see one of the two Rosa Pat Austin I bought for the bed.  I had this as my Wordless Wednesday on June 10th, but that one was actually in Louise’s garden at the Old Rectory.  I guess mine have been a little later to flower as they have been newly planted this year.

Another plant I bought in was the Achillea Terracotta.  I’ve admired this for a while so it’s been lovely to have a bed where it looks at home.  I’m hoping as the calendula (and maybe nasturtiums) give up, these will keep on flowering.

And lastly in this bed, another plant grown from seed (actually last year, and then never planted out!) the beautiful Hordeum Jubatum.  I do wonder whether it’s a bit odd combining grasses with roses, but I love both.  The grass provides such lovely movement and looks particularly special later in the day.

The photo below shows the view from ‘my’ seat at our out door table.  I’ve struggled a bit with the photo as the new bed looks rather bleached, while the oak bed and the over-the-road-Oak are virtually black.  Whilst it’s not exactly like that in real life, the oak bed certainly recedes into the shadows at this time of year and so doesn’t provide a very entertaining view from the table at exactly the time of year when you might be thinking of eating outside.

Later in the season I have some (sale bargain) dahlias to add, some kniphofia and geum and also Scabiosa atropurpurea Fata Morgana.  The Scabious were from Chilterns and have dainty scabious shaped apricot flowers which I’m excited to see!

Hopefully the bed will continue to evolve and improve over time as I edit the plants and decide what works best. 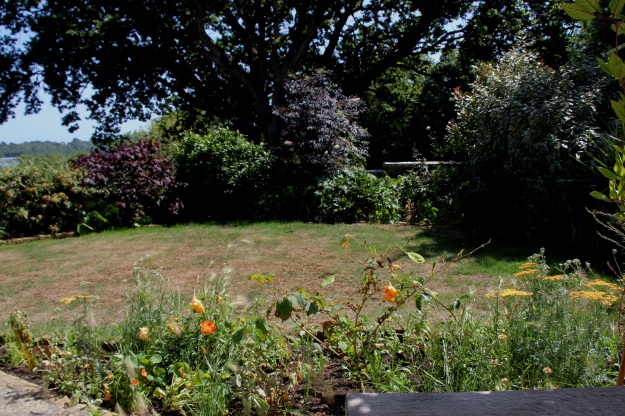 The other new bed, has also come on dramatically since March: 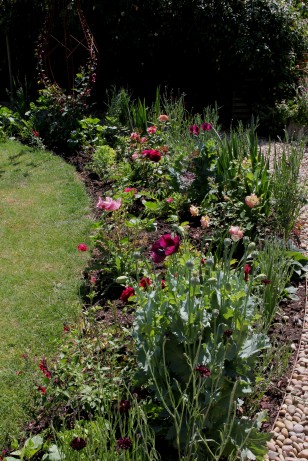 One of the early highlights, together with the transplanted Cerinthe, was the ‘mistake’ ranunculus, supposed to be dark, but actually bright pink.  They are just about over now, but have been flowering continuously for over two months. 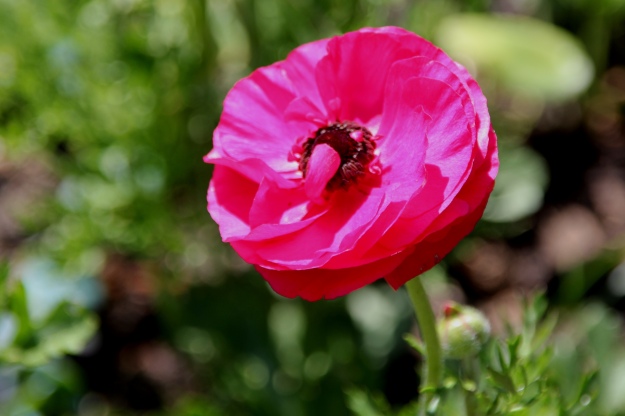 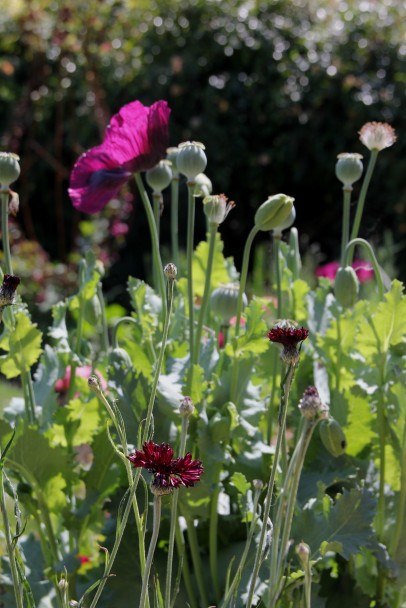 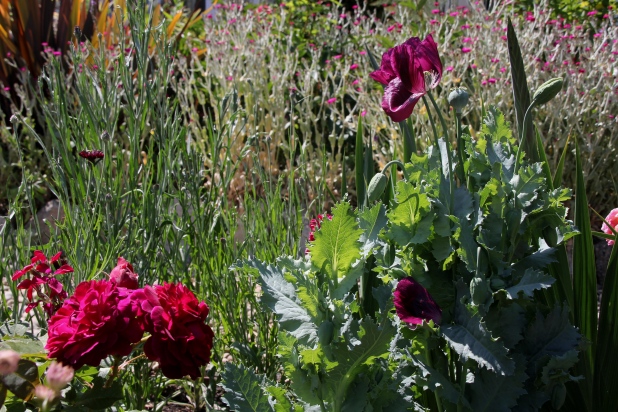 and two Jubilee Celebration I like, but really think are too pale here.  I think I need to ponder on this (and also have somewhere else to put them if I decide they have to move.

The third rose is Falstaff Climbing, which was bought to climb the ‘obelisk’ birthday gift.

The rose has not even flowered yet, and will clearly take some time to make a real impression, so in the interim I bought a Rhodochiton atrosanguineus which is just romping up the support.

As with the Bronze Bed, there are hopefully more delights to come – again some dahlias, and further seedlings yet to flower including Daucus Carota Black Knight.

Whilst I can’t pretend creating these new beds has been cheap, I’ve thoroughly enjoyed trying to minimise the expense by planning and growing a significant amount from seed.  And, as with much gardening, not everything has gone to plan, but we wouldn’t want it all to be too easy now would we? 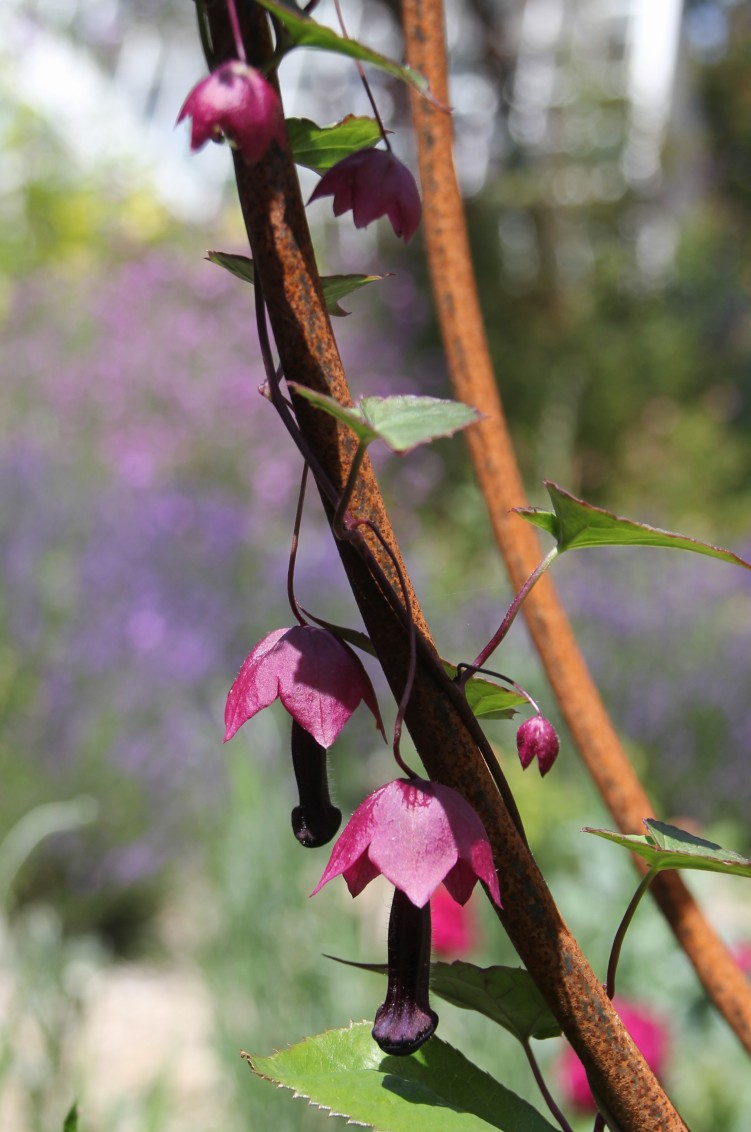