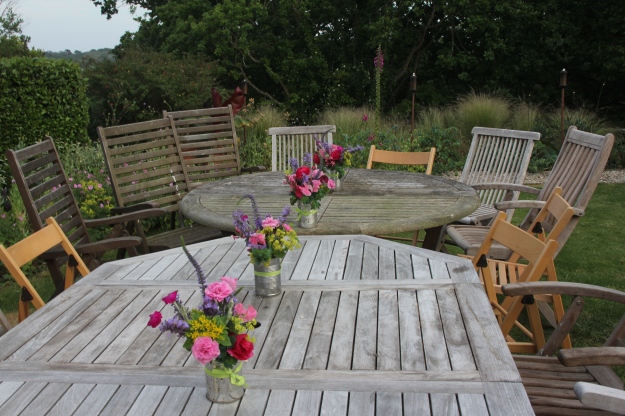 Although my daughter’s not 18 until the end of July, she decided to have her party to coincide with the end of her A Levels, and so Friday saw me running around getting ready before her arrival back from her last exam after lunch.

She only had around 20 guests and wanted them all to sit down to eat so we borrowed next door’s garden table, and, lacking the pre-planning to have organised a table cloth,  I fiddled about with flowers.  I thought about some prettier vases but was concerned they might get damaged and so plumped for rustic tin cans.

The choice of flowers was very much governed by what was plentiful or shortly to go over.  As some of you will remember, I’m opening the garden next Sunday for the local hospice and so was reticent to pick any ‘important’ blooms like peonies, which will hopefully still be blooming in a week’s time (and would probably have tipped the cans over anyway!)

I didn’t take any proper photos as there was a marquee to erect and decorate, a cake to make and a lot of furniture to move, so these are just zoomed in from the original.

The bloom, included Sedum, Pinks, Alchemilla mollis, Ranunculus, Lychnis, Sweet Peas, Nepeta Six Hills Giant and the lovely blue spire at the top of the photo above.  I have two quite big clumps of this and love it in flower arranging as I like the way the flowers curve.  The question is, does anyone know what it is?  I think it could be a Veronica or a Veronicastrum but I can’t seem to find the lable and I’d love to know.

I’m delighted to say the party went without a hitch, and even more delighted (and astonished) that a number of guests admired the garden – I don’t think gardens were on my radar at 18!

Why don’t you go over to Cathy’s at Rambling in the Garden and see what others have in their Monday vases.

11 thoughts on “In a vase on Monday – more Birthday celebrations”